A Tribute to Harold Denton:

A Man for the Moment 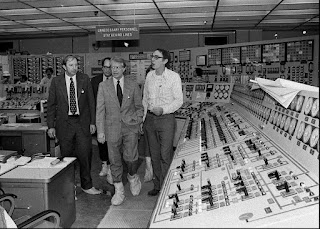 Harold Denton, left, is shown in the control room at Three Mile Island
with President Jimmy Carter and a power plant technician on April 1, 1979. (AP)


Sadly, this is one of two posts this week of the deaths of two icons of the technical community, and of my professional career--Harold Denton, who was the face of the Nuclear Regulatory Commission (NRC) at the time of Three Mile Island (TMI), and Mildred Dresselhaus, an MIT professor who did pioneering work in the field of nanotubes, and so much more.  Both have achieved a kind of "rock star" status during the course of their careers.

I only learned of the death of Harold Denton about a week after his February 13, 2017 death, when I saw an obituary for him in the Washington Post.  Although Harold Denton had a long and distinguished career at NRC and its predecessor, the Atomic Energy Commission (AEC), the article focuses almost exclusively on Harold Denton's role in the aftermath of the TMI accident.  This is fitting, as the accident was a pivotal moment for NRC and the nuclear industry.  As the obituary makes clear, Harold Denton exuded an air of calmness and competence that was critical in reassuring the public--and in beginning what would be a long process of analyzing and responding to the accident.

I did not join the NRC until a few years later, and I never worked directly for Harold, but while I was at NRC, I had many opportunities to see him in action in meetings and to speak to him.  By this time, the "rock star" status was past history--the Post reports that Harold was profiled in People magazine, he was awarded honorary degrees by several Pennsylvania colleges, and his likeness even appeared on T-shirts--but he still was held in high esteem at NRC.  Even when the issues were contentious, he never seemed to lose his cool.  The same calm manner that reassured the public gave him an air of authority among his peers.

It is interesting to reflect on the importance of the competence he brought to a frightening situation.  While many people criticize regulatory overreach, regulators often play a key role in averting crisis in the first place, and when the unimaginable happens, of working to assure the safety of the public.  The Post comments that, "He was that oft-maligned figure, a $50,000-a-year federal regulator, who managed to be the voice of competence and reason at a time of peril."

Not every regulator is a Harold Denton, of course, and most of the time--fortunately--we are not dealing with events as extraordinary as TMI.  Had TMI never happened, Harold would have had a very successful career at NRC and would, undoubtedly, have made significant contributions to nuclear power regulation, but except among his colleagues, these contributions would have been largely unnoticed.

It shouldn't take a TMI to bring to the public attention the kinds of skills and talents that reside in the bowls of our government agencies and the importance and value of those skills and talents for the American public.  Harold Denton would have been a remarkable public servant even if he had never been in the public eye.  The world has truly lost someone who probably never expected to be in the limelight, but who, when the need arose, stepped up to the plate and did a remarkable job.