This Shouldn't be so Difficult!

Those of us in the nuclear field frequently find ourselves having to address inaccuracies in published material.  In the past, I've encountered 2 categories--publications from organizations with a bias against nuclear power, and publications that attempt to be balanced, but sometimes make a mistake.  Today, I just encountered a third class--a publication that I thought was respectable, but that responded to my observations about a deficiency in their reporting by circling the wagons.

The publication I have in mind is an email list of articles I get called Energy Daily, which publishes under the management of Space Daily.  The article in question was an article discussing the impacts of US budget cuts on the ITER international fusion project.  Most of the article focused on that subject, but I was startled to see a paragraph that read:

So far achieved in a handful of labs at great cost, the process entails fusing atoms together to generate energy, as opposed to fission, the atom-splitting process behind nuclear bombs and power stations, which carries the risk of costly accidents, theft of radioactive material and dealing with dangerous long-term waste.


I immediately found a contact link and sent a message that indicated that this paragraph was highly inaccurate and misleading, and that I was surprised to find such a statement in this publication, particularly without attribution, as though all of this was established fact.  Among other things, I noted that, 1) fusion is used in bombs as well, 2) other energy sources generate toxic, long-lived wastes, 3) fusion isn't mature enough to know what its negative features are, and some radioactive byproducts will certainly be among them, and 4) the mention of accident risks and thefts of material need to be put in context.

Now, I have commented on statements in publications before, and if the publication is a reputable one, I usually get some acknowledgement that a statement was not as carefully thought out as it should have been.  In print publications, the resolution is sometimes an editorial correction in the next issue.  In online publications, it is a change in the text, and a mention that the text was corrected.

Therefore, when I received a response within 45 minutes, I was initially pleased.  But then I opened their message and discovered that they totally rejected all my points, even the factual statement that nuclear fusion is used in weapons.  Their argument was that the description of fission was "a stock, standard description."  They also argued that they provide extensive and detailed coverage of nuclear power news and technology, and therefore, "to single out one story without placing it in context to the rest of the news coverage creates a false impression..."

The only problem with this response is that no one reads everything, and no one remembers everything they read.  And the statement is made without any attribution or qualification.  I do realize that an article on fusion is not the place to digress into a long discussion of fission.  However, the article could have stood on its own without saying anything about nuclear fission.  In fact, the initial point of the comparison is clearly on the difference between fission and fusion, and the thought should have come to a full stop after saying that one process fuses atoms together while the other splits them.

But, once they made a statement that is so problematical, they should have responded to me much differently.  Any responsible publication that makes should be open to making corrections and clarifications.

I felt that some of my readers who may also read Energy Daily or other publications from this source might want to be aware of the level of their reporting, and of their attitude about it.  I tried to comment to the editor privately, thinking to save them the embarrassment of having their errors called out publicly, but since they seem to be unwilling to acknowledge even the most obvious errors, I should note that there is a place for comments at the bottom of their page. 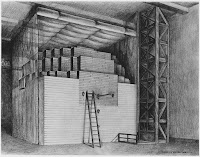