This Does Not Compute!

First, from Germany:  OK, they wanted to abandon nuclear power, and by the way, the rest of the world should, too.  Or at least Europe.  But now, Germany has announced that they are also abandoning their commitment to binding CO2 targets for 2020.  They are not saying that they can't do it without nuclear power.  They are just saying no.  But everyone else should close their nuclear power plants and still continue to commit to binding targets?

Next up, Scotland:  Scotland claims to lead the world in a low-carbon (via solar and wind) agenda, and urges the rest of the world to follow.  But at the same time, they bemoan the loss of their bid for independence.  They could have financed more solar and wind power with the revenues from their North Sea oil and gas.  So, everyone else should buy their oil and gas, but also follow their non-fossil fuel lead?

And finally, Sweden:  Sweden is angry at Finland's plans to build a nuclear power plant about 100 km from the Swedish border and 150 km from several Swedish communities.  Sweden has flip-flopped on nuclear power altogether over several decades, but they didn't like it so much when Denmark complained about Barseback being only about 20 km from Copenhagen, the capital of Denmark.  True, Barseback has now been closed, but as I recall, it took a long time, and when it was finally closed, it was not because of the Danish objection, but rather as a part of their first plan to phase out of nuclear power.  And the Swedish Forsmark nuclear power plant looks to me like it is not that far from Finland.  So, what's good for the goose isn't good for the gander?

As I said at the outset, lots of national policies don't make sense to me, both US policies and those in other countries.  But in these particular cases, the countries have put themselves out as examples to follow, yet there are glaring inconsistencies in what they expect of other countries.

One of the more intriguing items that crossed my desk a few weeks ago was an article saying that Google was terminating their R&D efforts on renewable energy.  Basically, their stated reason was that "trying to combat climate change exclusively with today’s renewable energy technologies simply won’t work; we need a fundamentally different approach."

To back up a bit, in 2007, Google undertook a major and well-publicized effort to conduct R&D to develop renewable energy technologies.  Their announcement said that they planned to invest tens of millions of dollars in emerging solar, wind and geothermal technologies in order to make them competitive with the economics of coal.  Later, they transformed their efforts from R&D to deployment of renewables and energy efficiency technologies.

Now, even though the cost of renewables has come down to the point where some claim it is getting competitive with coal, Google appears to have backed off.  They "came to the conclusion that even if Google and others had led the way toward a wholesale adoption of renewable energy, that switch would not have resulted in significant reductions of carbon dioxide emissions."

They appear to be backing off to a strategy where they are looking at a broader range of technologies and a greater mix of current and advanced options.  There are only hints to date of what some of these efforts might involve.

For those who are wondering if they might be considering nuclear power, they seem to be silent on that point.  They don't explicitly rule it out, but they appear to be focusing on ways of improving the penetration of the erratic generation from renewable technologies.  For example, one possibility they hint at is technologies that can control the grid efficiently, enabling higher penetrations of distributed generation.

Some might argue that, when companies change course, their publicly stated reasons are not always the whole story, and that may well be the case here.  Nevertheless, I find it interesting that their official explanation acknowledges that cheaper renewable systems to generate electricity are not enough.

The Danger of Narrow Viewpoints 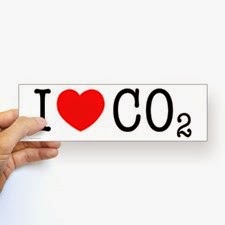 I was surprised to see an article by Dana Milbank in the Washington Post a few weeks ago that reported that the fossil fuel industry has begun touting the benefits of carbon dioxide.  Two days later, I saw a pro-CO2 bumper sticker.  This got my attention.

According to the report, the industry is doing an about-face.  For years, they have been saying that reports of global warming are false.  Now, though, they are admitting that fossil fuels are causing an increase in the amount of carbon dioxide in the atmosphere--but they are contending that is a good thing!  The basis of their argument is that CO2 is required for plants to grow, so more CO2 in the air will boost agricultural productivity and help feed the world's growing population.

The argument reminded me of the old adage, "It's an ill wind that blows no good."

The argument also reminds me of a point that has become a central theme of many of my blogs, as well as of some of my other activities--that energy supply is an extremely complex, multifaceted arena, and that it is a serious mistake to make decisions based on single measures, good or bad.

Every technology has pros and cons, and looking at any single measure presents a distorted reality.  This is as true of "renewable" advocates who tout the lack of emissions from wind and solar plants, but ignore issues of reliability, needs for limited rare earth supplies, land requirements, etc., as it is of "antis" of any stripe (fossil, nuclear, or other) who single out a concern without putting it in perspective based on the relative level of risk and possible mitigating strategies.

Let's look at the CO2 argument as an example.  Yes, CO2 is essential for plants.  We all learned that in biology class.  If that were the only measure of importance, we would not have to think about the future at all.  We could continue to spew out as much CO2 as possible.

But that is not the only measure of importance.  That same CO2 is expected to have serious climatic effects.  OK, some would say that may not be all bad, either.  Siberia could become the new breadbasket of the world.  BUT, at the same time, current areas of high agricultural productivity could become deserts and cease to be productive.  And rising sea levels could devastate heavily populated coastal areas of many countries, and even wipe out some island nations.

I could add many more potential effects--on wildlife, disease, etc.--as well as noting the health effects of other pollutants from fossil fuels.

And I would also agree that we need to continue the use of fossil fuels for the foreseeable future.

Nevertheless, it is pretty clear that some of the effects being postulated will be proved real, and that any mitigation is likely to be difficult and costly, and possibly to have other side effects.

While I can understand the temptation of the fossil fuel industry to go on the offensive to counter what they believe to be the negative image of their industry, I don't think such a narrow and distorted presentation is either ethical or productive.

It would be far more constructive if they would work to help understand the potential effects better, to contribute to strategies to deal with any effects, and to improve techniques for carbon capture and sequestration.

The Nautilus and Other Launches

As promised last year, I am starting the year with a discussion of significant nuclear anniversaries that occur in January.  These are again drawn mainly from my book, Nuclear Firsts:  Milestones on the Road to Nuclear Power Development.  I noted last month that December looked like an unusually busy month for nuclear milestones.

Predictably, then, the number of firsts I cover this month is shorter:

Although the number of events is smaller, most of them are very significant.  They include the start of nuclear propulsion (the Nautilus), the commercial operation of two new reactor types (heavy water and gas-cooled), and the first production-scale enrichment.  In fact, this month marks the 60th anniversary of the first cruise of the Nautilus.  The Nautilus was launched in January of the previous year (January 21, 1954), which actually makes for two nuclear milestones for the Nautilus this month.

On a sad note, January also marks the anniversary of the first fatal accident at a nuclear reactor facility.  On January 3, 1961, the SL-1 (Stationary Low-Power Reactor #1), an Army boiling water reactor being tested at the National Reactor Testing Station in Idaho, experienced a steam explosion and partial meltdown due to the improper withdrawal of the main control rod of the reactor.  The incident resulted in the death of three operators in the control room at the time.  (Note:  this was the first accident at a reactor, but there had been fatalities at other types of nuclear facilities before.)