The Change in Congress:

What it Means for Nuclear Power

Having lived and worked inside the Beltway for more years than I care to admit to any more, I'd like to caution everyone that the Washington scene is extraordinarily complicated. There's an old saying around town that people who like sausage or the law should not watch either one being made. (In researching that saying, I see that a version of it was originally attributed to Bismarck, so it isn't only a Washington phenomena.) I am reminded of that saying whenever I try to assess the prospects for nuclear in the new Congress. Especially now.

Here are a few of the relevant factors in play right now:

• It is true that the Republicans have traditionally been more bullish on nuclear power, but the nuclear issue has never divided neatly along party lines, and today, the party lines are blurring even more on this issue.

• Even granting that the Republicans may be somewhat more favorable to nuclear power, there are at least two other traditional Republican positions that tend to push Republicans in other directions--first, they are not as convinced, as a group, of the connection between man-made carbon emissions and global warming, and they do not favor many of the policies, such as cap-and-trade, that have been proposed to reduce carbon emissions; and second, their commitment to less government interference in the marketplace makes them less favorable to some of the government support mechanisms that have been proposed for nuclear power, as well as for other energy technologies.

• Overlaid on all this is the concern about the Federal deficit, which will make new funding for anything even more difficult than otherwise.

• The Republicans have control only of the House of Representatives. They have gained seats in the Senate, but do not control it. Therefore, to the extent that issues do split along party lines, the Republicans are not necessarily going to be able to get the votes they need in the Senate to pass legislation they favor, nuclear or otherwise. And even if they can gain passage of some legislation, they certainly would have difficulty pulling together a veto-proof majority on most issues.

• At worst, this is likely to mean gridlock for 2 years. The best hope is that it will lead to compromise, but deals struck in smoke-filled rooms (even if they are now technically smoke-free) can sometimes take very unexpected turns. Many times, some totally unrelated issue will end up driving a decision on a nuclear issue. And frankly, outside a small cadre of people, the issue of nuclear power isn't first on very many people's lists. When it comes to compromise, even a pet nuclear project has sometimes been tossed for a bigger pet of some other type--a judgeship, an earmark, or whatever. Here's where the law is like sausage being made.

So, I am neither optimistic nor pessimistic about the prospects for nuclear power in the new Congress. Others, such as Matt Wald, have also indicated that the shift in power is only a part of the picture. The decisions that emerge will less likely reflect the shift in politics than it will the economy, the budget, the price of alternatives...and the bargains struck in the halls of Congress.

First Evidence of Effects of Solar Arrays
This is ano 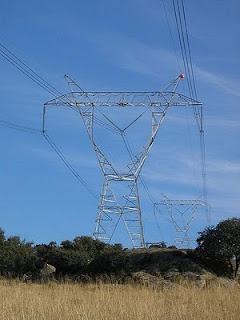 ther post in my occasional digressions into non-nuclear turf, done in the interest of trying to provide a full picture of the potential pluses and minuses of all energy supply technologies.

In this case, I am reporting on solar arrays and the issue of grid stability. Nuclear power proponents have long pointed out that our grids depend on a reliable source of baseload power, and that the irregularity and instability of wind and solar energy could result in serious problems. I have believed that, but to date had not seen reports of specific problems.

In the US, perhaps, we haven't reached that point. However, Germany apparently has reached that point. A report from Germany in recent weeks cites Stephan Kohler, an energy advisor to the German government, as saying that the generous feed-in tariffs have resulted in an "explosion" of new rooftop solar panels and large-scale photovoltaic plants, and that this is seriously stressing Germany's aging power grid. He is actually quoted as saying that "expansion of solar power has to be cut back quickly and drastically."

Now, like most stories, this one may not be quite so simple. Upgrading the grid may help solve the problem. This is not an inexpensive proposition in itself. Further, I have my own concerns that so-called "smart grids" may have their own vulnerabilities, but I don't want to end this post by crossing my arms and saying "told you so." The truth is never as simple as that.

Germany has apparently made the classic mistake of rushing full-tilt into a policy position on solar installations without considering what would happen if it was wildly successful. Of course, Germany isn't unique in its short-sightedness. So far, in my observation, every country keeps making the same mistake again and again. Just think about the effects of increasing ethanol on food crops and food prices.

My message is simply that the German experience is just the latest cautionary tale that we really need to learn to do a better job of anticipating the potential impacts of all technologies.

Not a Waste to a Manatee!
A recent news item about

manatees seeking out the warm-water discharges from Florida power plants during the recent cold weather reminded me that the thermal discharges from power plants (fossil and nuclear), which have gotten a bad rap most of the time, actually have some benefits. The manatees certainly seem to think so!

This news comes not long after the owners of Oyster Creek announced that they will shut down that unit, the oldest operating nuclear plant in the U.S., in 10 years rather than pay for cooling towers, as the state of New Jersey is demanding. Other plants are facing the same pressures.

Our friends the manatees remind us that one person's trash can be another person's treasure. Or more precisely, in this case, one creature's waste heat can be another creature's salvation. While plants in New Jersey and Florida are in very different climatic areas, it strikes me that, in any such situation, all parties involved should look for a win-win wherever possible. This has happened at plants in the south, where catfish and shrimp are raised commercially in power plant discharge canals, truly turning waste into income. (I was going to say turning waste into cold cash, but the metaphor doesn't quite work.)

Could that be done farther north? I don't know. Aquaculture isn't my specialty. And I am sure that some will argue that the waste heat still modifies the natural environment. (And that warming the manatees changes their natural lifestyle.) But the hard truth is that we need energy and we need food, and we have been modifying the environment ever since we learned to harness fire and farm the land. While we've made mistakes along the way, we've learned from them. Obviously, we need to consider what we displace, and one solution may not work everywhere, but if there are places where we can use plant discharges to save endangered animals or to feed the population, it sounds to me like we've got a win-win.