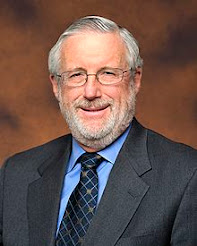 I was very sad to learn that Peter B. Lyons passed away on April 29.  He began his long and distinguished career at the Los Alamos National Laboratory, and then spent many years in Washington, first as a Science Advisor to U.S. Senator Pete Domenici and the Senate Committee on Energy and Natural Resources, and later, as a Commissioner at the Nuclear Regulatory Commission (NRC), and finally as the Assistant Secretary for Nuclear Energy at the Department of Energy (DOE).  During the course of his career, he made numerous contributions to nuclear science and nuclear policy, some of which are described in the DOE's bio on Pete and in the American Nuclear Society's (ANS) newswire article on his passing.

In addition to being a person of so many accomplishments, he was also an extraordinary human being, and I would like to focus on some of his personal characteristics that I observed in my many interactions with him over the years.

I first got to know Pete Lyons well when I was the Principal Deputy Director of the Office of Nuclear Energy in DOE.  He was one of the Capitol Hill staffers I met with periodically to discuss the work of my office.  Although Hill staffers are notoriously busy and overworked, and in other offices, I was often kept waiting or given only a brief, rushed audience, Pete was invariably respectful of the time of anyone visiting his office, and very thoughtful and knowledgeable in discussions.   His focus was always on the science and on the national good.

When I left DOE, I continued to see him occasionally at various conferences and other events, and to follow his career.  I have a special memory from 2013, when I served as the Faculty Member in Residence (FMR) for the Washington Internships for Students of Engineering (WISE), a program supported by the ANS and several other engineering societies to bring students to Washington for a summer to expose them to technology policy.  One part of the program was for the FMR to arrange for the students to meet leaders working in the science and technology policy area from the government and other organizations.

Pete was the Assistant Secretary for Nuclear Energy at that time, and I had arranged for the students to come as a group to meet him.  While I have been impressed by the fact that many very high level, very busy people, such as NRC Commissioners, Assistant Secretaries, and others, do make time to meet with the WISE students, Pete did much more than give them a briefing.  I had the students briefly introduce themselves and the topics they were studying that summer, and instead of just nodding his head and waiting for the introductions to finish, he engaged each of the students, asking them questions about their projects and offering them suggestions, or commenting on the schools or on other things they had mentioned.  I even saw him taking notes on their names, schools, and professional societies.  That showed a level of interest and engagement that went well above and beyond the norm.

After Pete retired from DOE, he remained engaged professionally.  I was delighted to see him be recognized last year with ANS’s Dwight D. Eisenhower Award for his influential leadership in nuclear technology policy and for the vital role he played in the nuclear renaissance of the early 21st century.  And I was pleased to see an article authored by him in the February issue of Nuclear News.  After I read that article, I sent him a message about it.  In his typical fashion, he responded promptly and graciously, even though I was aware that he was very ill.

In one of our last conversations in person, I noted to Pete that he and I both had served in NRC, DOE, and on the Hill--although I hasten to say that he served in a higher position than I did in each of these organizations!  There are probably relatively few people with such backgrounds, and maybe it is one bond we shared.  But my observation was that he treated everyone with courtesy and respect.

He will truly be missed, not only for his many contributions to nuclear policy in his various positions, but for his outstanding personal characteristics as well.

Posted by Gail Marcus at 5:13 PM No comments: