Visions from the Past

I was surprised yesterday to see in one of my emails an article published on January 20 in The Atlantic entitled "Why There Are No Nuclear Airplanes."  I have some personal history related to the concept of nuclear-powered aircraft, so this brought back some memories.

As it turns out, the concept of a nuclear-powered aircraft has been considered at least twice.  This article recounted the first efforts to develop nuclear powered aircraft, starting in the late 1940s and continuing through the 1950s.  This was by far the larger effort, and certainly the one that should receive the most attention.

However, there was a second effort in the 1970s that was much more limited and is much less known than the first initiative.  The Atlantic article didn't cover the second wave at all.  Although the second effort was shorter lived and never got beyond the very early planning stage, I thought it might be worth completing the picture by describing that effort.

But first, to recap the original program.  As The Atlantic article indicates, the 1950s concept for a nuclear-powered aircraft focused on supersonic aircraft that could stay aloft for long periods and wouldn't need refueling.  The payload capacities of the aircraft at that time, however, posed a number of limitations.  On the plus side, they led to the early R&D efforts on molten salt reactors, which had the ability to achieve a high power density.  However, even with the high power density, the plane could not carry the additional weight of a fully shielded reactor.  Therefore, the concept involved an unshielded reactor, and the pilots would have been subjected to high levels of radiation exposure.

The program was ultimately cancelled in the early 1960s.  By that time, the development of ballistic missiles, mid-air refueling, and longer range jet-fueled bombers largely filled the niche that nuclear-powered bombers would have filled.

Fast forward another decade or so.  With my freshly minted doctorate in nuclear engineering, I ended up working for Analytic Services Inc. (ANSER), a company that worked mainly for the Air Force.  When I was hired, I was told that I'd work on a variety of issues, but I would be the source of expertise within the company whenever a nuclear-oriented project came up.  Although that sounded intriguing, I wondered at the time if I'd ever see such a project.

I didn't have long to wait.  Shortly after I arrived there, ANSER was asked by the Air Force to do a study on a concept for a nuclear-powered aircraft.  This concept was much different than the earlier effort.  The need now was considered to be for an aircraft that could stay aloft for long periods of time for purposes such as command and control.  Thus, it would only need to operate at subsonic speeds.  It would also take advantage of the latest in both aircraft and nuclear reactor technology.  And the concept I was to analyze definitely called for the reactor to be shielded.

Well, that analysis showed that even with the larger aircraft that would be used, the weight of a shielded reactor would leave no allowance for any payload.  That alone doomed the concept in this second round.  (And there was no longer any consideration of exposing flight crews to an unshielded reactor.)  In addition, this was the period where public concerns about the safety of nuclear power plants were beginning to emerge, and the anticipated public resistance to the idea of flying reactors over the country also dampened the enthusiasm for this project.

So this time, the effort was limited to a paper study and to briefings and discussions with representatives from key Air Force and other organizations that would be likely to participate in such a project if it were to move forward.  No funding was ever allocated, and no R&D was ever initiated.  Thus, it is only a footnote in history.  Nevertheless, it is of interest to those who follow the history of nuclear power, and it is a reminder of how some concepts can be revived in different guises as technology develops and needs evolve.

At the time I did this work, much of it was classified, but when I tried to see if anything was now publicly available, I came across this very comprehensive study, which I can recommend to anyone who wishes to learn more about the brief renewed attempt to develop a nuclear-powered aircraft.

Anniversary of a Lethal Molasses Spill 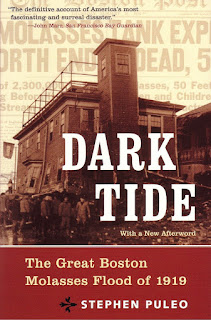 I was reminded this morning that today is the 100th anniversary of a lethal accident in Boston involving--yes, molasses.  The Great Molasses Flood of 1919 may sound quaint and silly today, but was, in its time, a significant accident that triggered changes in construction requirements and laws requiring professional certification of engineers.

This sad anniversary reminded me yet again of how rules and regulations, onerous as they may seem, often trace their origins to the tragedies that occurred in the days before society realized the dangers of some of its activities.  I have written previously about the Triangle Shirtwaist Factory Fire of 1911 and the ensuing developments in fire codes.

And both of these historic events, as well as others, always make me reflect on how we can anticipate the potential for accidents as we develop and deploy new technologies and put the right preventive measures in place before anything happens, rather than after.

It seems to be an issue that arises in every area of human endeavor.  After all, who would have imagined that molasses might cause such a deadly accident?

Today, we face other technological developments that raise similar questions:  What are the potential risks from driverless cars?  How can we assure that GMOs are safe?  Is fracking a miracle development to extract more fossil fuels from the earth, or are we going to trigger earthquakes?

The nuclear power industry has long grappled with such questions in relation to the use of the atom, and some of the techniques developed to analyze different nuclear accident scenarios, such as probabilistic risk assessment, have been adopted by other industries as well.

That is not to say that the nuclear field has all the answers.  Indeed, the issue of risk from technologies seems to be a continually evolving one.  Population growth in an area, rises in sea level, changes in weather patterns, competing societal requirements, and more all affect the calculation of risk from nuclear power, as well as from other technologies.

And the answers are never simple and never perfect.  Some answers require costly systems to prevent or mitigate accidents, or siting restrictions, or other constraints.  And we continually seem to discover new issues, or new aspects of issues we thought we understood.

These are not issues that can be resolved in a blog.  But the fact that this is the anniversary of an event that sparked a lot of change in its time does deserve mention in a blog on nuclear power issues.  At a minimum, it reminds us that society has dealt with the issues created by "new" technologies (or, perhaps in the case of molasses, a growing industry) for a long time, and it gives me hope that we will continue to do so with the technologies of today.