Does the Term Make a Difference?
I recently attended the annual conference of the American Association for the Advancement of 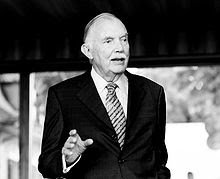 Science (AAAS), held this year in San Diego last week. There were a number of interesting sessions at that meeting, and I may use some of them as a launching point for later discussions, but I had one personal conversation with Lew Branscomb that I thought might be of particular interest while the Northeast is still being pounded by snowstorm after snowstorm this season.

Lew, as many will recall, had a distinguished career that included several presidential appointments, as well as high-level positions in industry and academia. While he is a physicist, and not a climatologist, the breadth of his career accomplishments certainly made me sit up and listen when he started talking about climate change and global warming.

He bemoaned the fact that the phrase "global warming" has taken root so strongly in our vocabulary. It leads, he feels, to a natural tendency to dismiss the science every time we have a regional cold spell--or greater than average snowfalls. I must confess, I have personally been guilty, on occasion, of saying things like "Where is global warming when you need it?" whenever we get some really wintery weather. I say it jokingly, of course, because I am aware that the variability of weather patterns means that we can have a warming trend, but still have cold and snowy days, but I can guess that some may take a snowfall as a signal that global warming is a hoax.

He feels the right terminology is "climate change," not global warming, and the snow, he believes, is added proof that climate change is, indeed, very real. He points out that climate models predict that one change in the climate will be more moisture in the air. The temperatures in the Washington, DC area (we were focusing on this area in the conversation) have been pretty typical winter temperatures, he noted. I have not had a chance to check this, but indeed, the temperatures haven't been exceptionally low this winter. What has brought us such severe snowstorms, he notes, is the very fact that there is more moisture in the air.

Of course, we all know that weather and climate are very complex phenomena, and I don't think he intended to extrapolate too much from the data point of one snowy winter. However, his point is well taken that we need to look at more than temperatures, and his suggestion that the term "climate change" is better than the term "global warming" is well taken. I'm not sure I'll purge it entirely from my vocabulary, but I'll be a bit more careful from now on. And I may not be able to resist completely the occasional urge to ask what happened to global warming when I need it, but I may be more careful about my audience when I do use the joke.

An Interesting Question
Following my posting of a comment by Rod Adams on my January 6 blog entry, he and I continued the discussion through an exchange of a couple of private e-mails on one of the points he raised. One point he made is so important that I thought it deserved to be shared in a full entry, rather than a series of comments to comments.

He had remarked on the difficulty of carbon sequestration, and I echoed his concern. I am not an expert in this field, but I had in mind reports I have read from time to time of the earth belching up gases from somewhere in its depths. I am thinking of incidents such as the 1986 eruption at Lake Nyos in Cameroon that killed 1700 people. Now, I know there are differences--the gas, the geology, etc. And I have read reports that there may be ways of chemically binding the carbon dioxide to something to make it a liquid or solid, although no one states the energy cost. The point is that there are at present a lot of unknowns about the feasibility of carbon sequestration--and yet many seem to regard it as a given that the problems will all prove tractable.

The point that Rod added that I hadn't thought of is this: "When I think about the physics of storing used nuclear fuel - which is in the form of corrosion resistant tubes containing high temperature ceramic materials - and compare it to storing a gas like CO2, I just have to shake my head. Why is the first one considered impossibly difficult and the second one just a matter of scaling up technology that is just around the corner?"

That is such a profound observation that I really can't add anything to it, except perhaps that radioactive isotopes do eventually decay. Carbon dioxide doesn't. Rod's observation is a good one to keep in mind the next time you encounter someone who says the waste problem is insoluble.

A Look at the New Panel and its Mission
It is no longer news that the Department of Energy has finally named the long-awaited blue-ribbon commission to evaluate policy options for a safe, long-term solution to managing America's used nuclear fuel and nuclear waste.

Still, I think it would be useful to look more carefully at the makeup of the panel and their marching orders and to speculate on what this might mean for the outcome of their deliberations.

First, let's look at the panel. Three facts are noteworthy:

The 15-member panel is heavily dominated by people with high-level political experience in Washington. It includes former Members of Congress and former senior-level appointees in a number of government agencies. While some of the committee members have technical backgrounds, this is not primarily a technical committee. This membership reflects a fact that many of us have been stating for years--the problem is not a technical problem, it is a political one. This is a very appropriate membership for such a committee.

The panel is thoroughly bipartisan. The co-chairs, former Congressman Lee Hamilton and former National Security Advisor Brent Scowcroft, represent the two political parties. The other members likewise represent both parties. They include two former Republican Senators (Pete Domenici and Chuck Hagel) and several political appointees--Vicky Bailey on the Republican side, and Dick Meserve and Ernie Moniz on the Democratic side.

The panel members bring a broad range of experience to the Commission. The members not named above include: Albert Carnesale, who brings a background as an international negotiator; John Rowe, who represents the utilities; Mark Ayers, who represents the trade unions; Jonathan Lash and Phil Sharp, who represent two major think-tanks on resource issues; Per Peterson and Allison Macfarlane, who are both recognized experts for their research in nuclear waste and other issues; and last, but certainly not least, Susan Eisenhower, who has earned an outstanding reputation for her work on nuclear and other issues.

Now let's look at the mission of this group. They are charged by Secretary Chu "to conduct a comprehensive review of policies for managing the back end of the nuclear fuel cycle. The Commission will provide advice and make recommendations on issues including alternatives for the storage, processing, and disposal of civilian and defense spent nuclear fuel and nuclear waste."

I have italicized some words that I believe are particularly important. They are to recommend policies, not particular sites. They are to review alternatives. According to comments by high-level officials made in conjunction with the release of the commission's membership, these alternatives will include such options as temporary storage and reprocessing in addition to permanent disposal.

The commission is to produce a draft report in 18 months, and to complete its work in 2 years.

While we cannot know how they will choose to approach their very difficult task, I can only imagine that the past US experience will weigh heavily into the discussion, as will the experiences, positive and negative, in other countries in recent years. Although the commission is not charged with selecting sites, it may be able to distill some guidance from the current understandings of different geologic formations and their stability over very long time periods.

Of course, their work is only the first step toward developing and implementing a new national policy for managing our used nuclear wastes. After their recommendations are tendered, it will be up to the government to return to the very difficult task of site selection. This process is likely to take a long time. However, the commission's role in establishing a policy foundation for the future decision-making process may well prove to be the most crucial step.

We can only wish the commission success in tackling the very important issues they face.