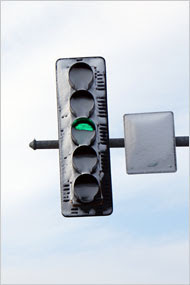 More Unintended Consequences
I've addressed the theme of unintended consequences before, but another example of an unintended consequence of an energy-saving measure recently came to my attention. This one, entitled "LED Signals Seen as Potential Hazard," was from a New York Times report a few weeks ago. It concluded that LED traffic signals installed to save energy have been found to perform poorly in some bad weather conditions. Specifically, the very fact that LED traffic lights do not emit as much waste heat as conventional bulbs means that they are less able to melt the ice and snow in the winter. There are now documented cases of the ice and snow accumulating and obscuring the light signal, resulting in injuries and fatalities from traffic accidents.

Although this is another discussion that at first glance seems to stray far from the nuclear field, it is a concern I've mentioned before because it is emblematic of the kinds of issues that must be addressed as we try to transition to energy technologies that are more efficient and/or less carbon intensive. In that sense, as I'll note, it has a message for the nuclear community as well.

I'm not completely sure why the scientists and engineers have not been able to develop the ability to try to project such consequences. I do realize it is difficult. I also realize that it is the same kind of issue that comes up for every technology and every consumer product, whether it is an electric power station or a children's toy. We've got to anticipate ways that people will misuse appliances. We've got to anticipate all conditions under which a system may operate--rain, snow, heat, humidity. We've got to anticipate the resource requirements, competition with other needs, etc. when a new technology grows from limited to large-scale use. (A good example is the impacts of biomass production on food costs.) We've got to look at the entire life cycle of the technology. (An example here is the disposal of energy-efficient light bulbs.)

Although LED traffic signals may seem quite far afield from the nuclear discipline and although the most difficult issues of projecting the impacts of new technologies at the moment seem to be outside the nuclear field, I think there is a message here for the nuclear community as well. For example, questions are raised from time to time about the impacts of the increased use of nuclear power. Will there be enough uranium? What will the land impacts be of mining lower-grade ores?

There may be good answers for such questions, but the time to explore them should be before people are injured or killed because of snow-covered traffic signals. Likewise, most of us can probably address the questions about uranium, at least in a qualitative way, but the questions are good ones, and will need better answers if we are to realize a nuclear renaissance.

I don't know how to make sure that we do a better job in the future of "connecting the dots" in the future to assure that people who design LED traffic lights do not wait for someone to die before they figure out that the lights will not generate enough heat to melt snow and ice. I can only hope all of us in the business of trying to introduce new technologies are learning that technologies can have unintended consequences and are consciously and methodically trying to anticipate in advance what these might be.

Nuclear Energy and the Public:

How to Cast the Message

One of the perennial problems we face in the nuclear industry is how to discuss this complicated technology with the public. Many people advise us to simplify. They have a point. You obviously can't use complicated equations that took most of us years to learn, or show them schematics with symbols that only a practitioner would understand.

On the other hand, it has worried me more and more that we sometimes tend to err in the other direction. We state facts without supporting them and expect people to believe us. Or, we select the facts that support our case, rather than acknowledging the potential difficulties and risks. In part, I think we have fallen into that mode in order to avoid "giving aid to the enemy."

We know there are others who will jump onto the negatives and distort them. We know that some members of the public will hear only the problems, and not the low probabilities of a problem or the robust preventive measures in place.

Still, I think we all know from our personal experiences that we quickly lose trust in people who we feel don't tell us the whole truth. I was therefore very interested in a recent article in the Vancouver Sun discussing the importance of admitting nuclear risks. I think it offers a message worth heeding.

I would add a few other bits of advice to this one:

1. Don't select only the facts that suit your case.

Explain the facts that don't support your case as well. Are they less important? Can they be overcome in some way?

Address the "facts" they use. It is not really important that the challenger is a "well-known anti-nuke." What is important is what is right or wrong about the arguments raised.

Most people know when they are being patronized or spoken down to. You can't avoid the fact that some of the story is not simple or straightforward.

4. Don't just state your position as though it is fact.

Explain why you believe as you do. "Nuclear power is safe" may be a fact to you, but it is the underlying reasons that will convince others, not simply your say-so.

5. Keep in mind that people fear what they don't understand.
Acknowledge that it is reasonable to be concerned, given the mis-truths and half-truths that have been in the news. Help them understand the facts. Explain the safety measures. Put the risks in context.

6. Play fair when you compare nuclear power to other energy technologies.

It is easy to show how nuclear is better than coal in some respects, and better than solar or wind in other respects. When you make such comparisons, be sure to present the whole picture.