A Visit to Fukushima: 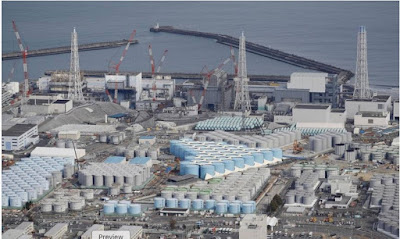 [Note:  Paragraph 5, on observable impacts to the area outside the plant, and paragraph 8, on observations at the site, were modified on November 9 to add a couple of additional observations.]

I recently had an opportunity to visit the Fukushima Daiichi Nuclear Power Station for the first time.  While many people have visited the site since the accident on March 11, 2011, the site does keep changing, so I thought my observations might be of interest.

I was in Sendai, Japan to participate in the International Conference on Maintenance Science and Technology (ICMST), and on the day following the conference, they offered a bus trip to the plant and a tour of the site.  A group of about 3 dozen of us boarded the bus at 8 am at the Sendai train station for a tour that would take us first to the Naraha Center for Remote Control Technology Development, run by the Japan Atomic Energy Agency (JAEA), and then to the Tokyo Electric Power Company (TEPCO) Fukushima Daiichi site.

The Naraha site, about 2-1/2 hours south of Sendai (past Fukushima), was established following the Fukushima accident, is intended to provide a center for organizations engaged in nuclear power plant decommissioning activities to develop and test robotics and other equipment and procedures for decommissioning.  We visited the 2 main facilities--a full-scale mock-up test area, and a virtual reality system.  The virtual reality demonstration was particularly dramatic, as we "toured" the inside of the power plant.

We then turned north again and traveled to the Fukushima plant.  As we got close, my first reaction was that nothing seemed wrong in the surrounding area.  There was other traffic going in both directions on the route we were traveling.  There were stoplights on the road we were on.  We were passing houses and shops.  All of them seemed intact.  They were not boarded up, there were no signs of vandalism, and there were cars parked in front of the buildings.

It was only when we looked closely that we started seeing that something was not quite right.  There were no people around any of the shops.  Some of the side streets were blocked off, or had policemen controlling access.  In fact, entrances to parking areas were also blocked, so you could drive through the area, but not stop here.  As we really focused on what we were passing, we could see places where the grass and bushes and trees were clearly taking over, covering paved areas and entries to buildings.  Once we had figured out what to look for, it became obvious that we were driving through a no-man's land.  And to drive the fact home, from time to time, there were displays on the side of the road broadcasting current readings from local radiation monitors.

When we got to the nuclear power station, we were taken first to a building where we had a briefing on what we were about to see, and then to another building to prepare for our tour.  While I've seen and heard reports of groups that have toured some areas by foot, we were going to stay on a bus and tour strictly by bus.  That was a disappointment, but it undoubtedly saved a lot of time, as we didn't have to don much protective gear.  It seemed to take long enough as it is for all of us to be issued entry cards, dosimeters and cotton gloves, and to be processed in.  And, unfortunately, we had to leave all cameras and cell phones behind, so I have no personal photos of this visit.

Once into the facility, we boarded another bus and went on a very thorough tour of the facility from the roads.  We passed all 6 units, and probably got within 50 yards of several of the damaged units, with frequent stops for the guide to explain what had happened at each unit, and what has been done since then.  In Unit 1, we still could see the skeletal remains of the building, while Unit 3 has been covered with a dome for the refueling operation.  Where damage is still visible from the vantage point of the bus, they pointed that out.  As we drove around the facility, they also indicated where the ice wall was, and the pipes that feed it.  One impressive feature is the hundreds of tanks that have been brought in to allow the storage of contaminated water.

They also showed us some of the human side of the facility, both before and after the accident--the remaining cherry trees of the hundreds that used to line the main drive and that were enjoyed by the staff in the spring (many had to be sacrificed for some of the post-accident activities), the new administration building, the housing for staff.  Also obvious were cars without license plates sitting in the parking lot; they had been on the site at the time of the accident and are now limited to use on the site.  They were particularly proud of some of the progress they've made.  In 96% of the facility, decontamination has reduced contamination to low enough levels that no protective clothing or only light protective clothing is needed.  (Of course, some of the more intense work is in the areas that are still contaminated, so a significant percentage of the staff still needs to suit up.

In the briefings and on the tour, there was much emphasis on the fact that they are only 7 years into an activity that is expected to last for decades.  It will be interesting to continue to follow this activity and track the progress over time, although many of us ruefully commented to each other that we might not be here to see the completion of the project.