A Tribute to Mildred Dresselhaus:


Note to readers:  The URL title of this post was intended to be "A Tribute to Mildred Dresselhaus."  In attempting to add the YouTube video of the Super Bowl ad, my control over the title has somehow been overridden.  Although the right title appears in the post, the URL is not the same.  I am not sure whether to blame YouTube or the blog host, but given that this is a tribute in memory of her, I feel the original title of the video is inappropriate, and just wanted readers to be aware that this was not my choice.

A Pioneer on Many Fronts 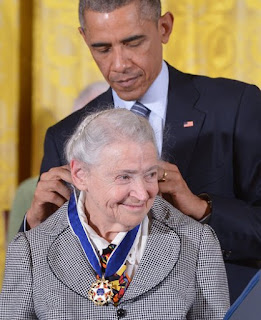 Sadly, this is one of two posts this week on the deaths of two icons of the technical community, and of my professional career--Harold Denton, who was the face of the Nuclear Regulatory Commission (NRC) at the time of Three Mile Island (TMI), and Mildred Dresselhaus, an MIT professor who did pioneering work in the field of nanotubes, and so much more.  Both have achieved a kind of "rock star" status during the course of their careers.

When I heard the news about Mildred Dresselhaus' death early this week, I was doubly sad.  First, I had known her for a long time, and I knew about her work and her accomplishments.  But second, she had been slated to speak to the Washington, DC area alumni/ae on March 9, and I had been looking forward to attending and to seeing her again.

My earliest encounter with Mildred Dresselhaus, or "Millie," as we all knew her, was in the early days of my freshman year at MIT.  This was at a time when there were very few women in science or engineering, so it probably makes her the first female scientist I met.  She had a great interest in helping and mentoring the small number of women at MIT, and had come to our dorm to talk to us about careers--and about combining careers and a personal life.  This is a subject that still gets attention today.

Even then, her energy and devotion to both her work and her family were clear.  The fact that, as a young professor, she took the time from her work to help mentor us was telling.  This was a time when mentoring was not as common, and did not help a junior professor in advancing through the ranks.  In fact, as she said repeatedly throughout her career, she took only a day or two off for the birth of each of her children, which was undoubtedly a reaction to the fact that, in those days, her career would have been doomed had she taken much more time off.  In fact, although I haven't seen it reported in the obituaries, I recall her telling us that, when her babysitter was unavailable, she took her babies to work with her at the MIT Magnet Lab.

After I left MIT, I didn't see much of Millie for many years, although I periodically heard about some of her many achievements.  (Since these are detailed in the obituary, I won't repeat them here.)  But to my delight, our paths crossed again while I was at the Department of Energy (DOE), as my tenure there overlapped with her appointment as head of the DOE Office of Science.  We were in different offices, so our paths didn't cross every day, but our offices had some common interests, and I was able to meet with her a number of times and to get to work with her as a professional.

Following that, our paths crossed less often, although I met her several times at conferences of the American Association for the Advancement of Science (AAAS).  Therefore, I had been very excited when I saw that, even in her mid-80s, she was scheduled to come to Washington, DC, and I was looking forward to hearing her speak and to seeing her once more.

It is particularly bittersweet that her death comes just as she assumed real "rock star" status, with the General Electric ad at the last Super Bowl designed to encourage women to study science and engineering, and having been dubbed the "Queen of Carbon" for her nanotube work.  My only consolation is that she will live on in all she has done in her career, both in her technical work and in her support and assistance to so many women in their careers.