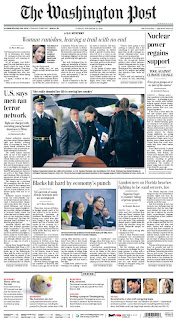 Growing Public Support for Nuclear Power Increasingly Recognized
I normally don't like to post a message simply to report a news item in the major media, but I had to sit up and take notice at a front page story in the Washington Post this morning noting the growing public support for nuclear power plants around the world. While we in the nuclear field have been seeing this trend for some time now, it has been piecemeal, and the change in attitude has been less apparent to the general public. I can't even count how many times in recent years I've had a conversation with someone that starts with them indicating that they think there is no interest in nuclear power or nothing happening in the field. I then recount the countries that are building new plants, the countries that are thinking about starting nuclear power programs, and the new programs and activities in the United States. With this article hitting the front page of a major newspaper, I hope that I won't have to do that as much from now on!