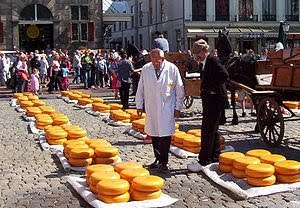 I don't know why it is that I keep coming back to cheese as a theme, when the overall topic is nuclear energy. (See my previous essay for the JANUS series in this blog or on the JANUS website.) Maybe it's because I like cheese. Whatever the reason, a recent article from MIT called "Against the Common Gouda," discusses some concerns of cheese-makers about US rules on cheese production. This article reminded me of a past initiative of mine. Although it is not about nuclear power per se, and although it was unsuccessful at the time, it is probably of interest to the same community, and it may be time to raise the issue again.

By contrast, some other countries do not require either pasteurization or aging of their cheeses. In particular, France does not have these requirements, and I think most people would agree that, when it comes to cheeses, the French know their stuff. Those of you who have lived or traveled in France know that there are a number of soft, fresh cheeses that are either not available here--or if they are, the pasteurization required here has made them a shadow of what they could be.

Now, in the first place, one can question the need for the rigid US rules. In the three years I lived there, during which time I had the pleasure of eating many fresh cheeses, I did not see reports of massive illness due to the consumption of unpasteurized cheeses. In fact, I didn't see any reports of illnesses. The French--and as the MIT article relates, many artisanal cheese makers in the US--believe that careful attention to cleaning of the equipment used in cheese making makes the process safe and hygienic.

Furthermore, the small population that may be particularly susceptible are taught the risks and behave accordingly. Female friends in France told me that pregnant women in France know that they are not supposed to eat unpasteurized cheese. The entire population is not denied because the cheeses may present more of a risk to pregnant women. Just as Americans are not denied access to wine just because pregnant women should limit their consumption of wine.

But where, you might ask, does nuclear energy come in to this picture? Well, the listeria can also be killed by irradiation. So, to paraphrase a famous quote, pregnant women could have their unpasteurized cheese and eat it. However, the same FDA that doesn't allow the sale of unpasteurized/unaged cheeses also does not permit cheese to be irradiated.

About 10 years ago, when I was president of the American Nuclear Society, I tried mightily to address this issue. I hoped to serve irradiated, unpasteurized/unaged cheese at one of our receptions. First, I had to confirm that irradiation would not change the taste or texture of the cheese. For that, I enlisted the help of some friends in France, who had some cheese irradiated and convened a small group of experts to taste the cheese. Alas, I could not join them! However, they reported to me that they felt the irradiated cheese had the same taste and texture as the unirradiated cheese. So, there was success on the French side.

However, when I turned to the FDA to seek permission to import the cheese, I was rebuffed. I initially requested just a one-time exemption, knowing that a full rule change would take more time. Even that was rebuffed. I then turned to Congressman Joe Barton, who had an interest in this issue. He and his staff made heroic efforts to get the FDA to change its position, but to no avail.

That was 10 years ago. Perhaps now, with the increasing interest in artisanal production of foods, the situation might be different. The MIT article didn't mention irradiation as a possibility at all. In fact, I might imagine that small-scale farmers and cheese makers might initially be turned off by the idea, as it might seem counter to their idea of more "natural" food.

However, the use of irradiation would address a lot of concerns: What if all producers do not consistently maintain the high level of cleanliness required? What if we do not manage to educate all pregnant women and others with compromised immune systems? Irradiating fresh cheeses can address those concerns, and open the US market to a broader and more interesting array of cheeses. As one who misses some of the cheeses I ate in France, I would like to encourage all those involved to reconsider the use of irradiation for cheese.
Posted by Gail Marcus at 8:51 AM