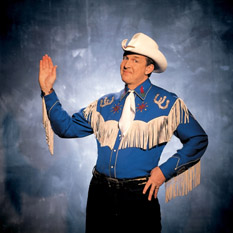 I've always told people that I thought a nuclear engineering education was a very broad and versatile background for a large variety of careers.  Indeed, I have known people with degrees in nuclear engineering who ended up far from the fold--in other science and engineering fields or in the financial sector.

Until recently, however, I had not heard about Paul Chrisman (a.k.a. Woody Paul), a country western musician with a Ph.D. in nuclear engineering from my own alma mater, MIT.  Recently, when flipping through my alumni/ae magazine, that deficiency in my own education was corrected.

It turns out that Woody Paul is a long-time and very successful singer and fiddler for the group known as Riders in the Sky.  And true to my perhaps chauvinistic view of nuclear engineers, he is remarkably successful at what he does.  Evidence of his recognition includes two Grammy awards, and most recently, induction into the National Fiddler Hall of Fame.

I was very pleased to learn that he is still high on science and engineering.  You don't hear of many musicians who say they are fascinated with entropy!

So next time someone insinuates to me that engineers are boring or out of touch, do I have an answer for them!