An Op-Ed in the Nikkei Newspaper 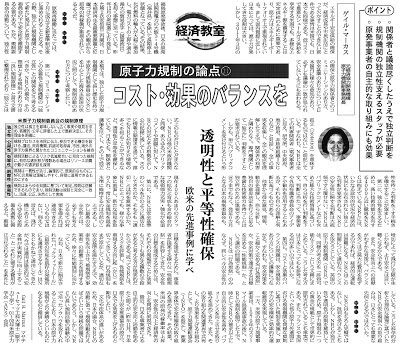 I recently had the pleasure of being asked to provide my views on Japan and its new Nuclear Regulation Authority (NRA) for publication in the Nihon Keizai Shimbun, the leading business newspaper in Japan (published by Nikkei, Inc. - home of the famous "Nikkei average").  The article was translated into Japanese and published on April 19, 2013 (page 29).  I just received permission to post the English language version in this blog.  It follows below:


The Independence of NRA and its Regulatory Activities

Both in Japan and in the U.S., a stable, safe and affordable supply of energy is essential for economic growth and individual well-being. Accordingly, it is important to assure the availability of a variety of energy sources, even in the U.S., which is now enjoying the benefit of abundant shale gas at low cost.  Therefore, nuclear power is a key part of the U.S. energy portfolio. In Japan, which lacks domestic resources, nuclear power has played a significant role in the stable supply of energy in the past. However, since the Fukushima accident, all nuclear power plants in Japan except Ohi nuclear power plant Units 3 and 4 have been shut down. This has resulted in a considerable increase of fossil fuel imports, rising power generation costs and the largest ever trade deficit (outflow of national wealth).

Prime Minister Abe’s new cabinet, inaugurated after the Lower House Election in December last year, places top priority on Japan’s economic recovery, and thus seems to emphasize restarting the nuclear power plants. Indeed, Prime Minister Abe stated in his first policy speech to the Diet at the end of February that the nuclear reactors should be permitted to restart if their safety is verified. For restarting, safety verification by the Nuclear Regulation Authority, which is a newly formed independent regulatory organization, is required, and the process for restarting operation is expected to begin after the new safety standards are established and come into effect as scheduled in July. The Nuclear Regulation Authority thus has a key role to play.

On the other hand, viewed from the U.S., there does not appear to be a consensus among Japanese people; there are very diverse opinions regarding the activities of the Nuclear Regulation Authority, its independence, and the way it should communicate with stakeholders, and also the principle of the new standards. In view of the crucial role that the Nuclear Regulation Authority will play in Japan, I would like to discuss nuclear regulation from the perspective of the longstanding experience of the independent regulatory authorities in major economies, focusing on the U.S. Nuclear Regulatory Commission (NRC) as an independent nuclear regulator.

First of all, let us consider the necessity of communication. How does the need to communicate affect the independence of a regulatory organization? In the case of the NRC, the standards a regulator should meet are outlined in a document titled “Principles of Good Regulation”, which clearly states, “independence does not imply isolation”.  Therefore, the NRC focuses on equal and transparent communication with all parties in order to make fair judgments and considers the views of all stakeholders along with facts they present. These opinions include information not just from the utilities, but also from research institutes, the national government, local governments and non-government organizations (NGOs). Furthermore, communication is not just a matter of receiving public comments. The NRC (like all other U.S. Federal agencies) documents and publishes its analyses of all public comments received in response to NRC requests for comment, as well as in response to all petitions. This practice provides a public record of how the NRC has considered and addressed concerns raised by all interested parties. This is partly because the way in which NRC explains its response to public comments is subject to court review if a decision of the NRC is appealed to a court. Courts are not safety experts, so NRC’s judgment is respected as that of a specialist organization. Moreover, anyone can gain access to most of the information available to the NRC through a freedom-of-information request. Thus, close communication between the NRC and stakeholders has been established by assuring transparency and equality. It is desirable that similar practices would be made a rule in Japan as well.

Secondly, there must be a high degree of technical competence among the roughly 4000 employees at NRC to support independence. The NRC is required to make judgments “independently” as a specialist organization, irrespective of any political, economic, or other interests.  Even the President may not override the safety decisions of the NRC.  The NRC makes its judgments based on all the technical information it receives from all sources, including the public comment discussed above, and on its own review and analysis of the data. When making a judgment, the NRC may use or adopt ideas that originated from utilities and external expert committees, but only after NRC conducts its own review to confirm that any outside analyses or recommendations meet NRC’s requirements, and only after it explains that review. Therefore, to maintain independence, it is important to have sufficient technical competence to understand opinions, information and advice given by others, to analyze them, and to make its own decisions. Needless to say, it is essential for Japan’s NRA, which has about 500 employees, to improve the expertise of those employees and to increase the number of employees.

Thirdly, I would like to consider what constitutes “an appropriate level of safety standards.”  What does an appropriate level mean?  The NRC continually reviews and updates its regulations based on insights gained from various events and from new knowledge and findings, and in addition, adheres to Principle 5, “Optimization of Protection” of the Safety Standards set out by the International Atomic Energy Agency (IAEA). However, the highest safety level is not necessarily achieved by providing all possible countermeasures. As an analogy, if an airplane were to be fitted with every conceivable safety feature, the increased weight could cause problems during a flight, and the airplane might actually be less safe.  Or, the cost of a very tiny improvement to safety could be so high that it would not be economical to operate the plant. When imposing new regulations, NRC performs a risk-informed analysis, to assure that the resulting regulation maintains an appropriate balance between the costs and the benefits. Such a balance can be also found in United Kingdom in the concept of “ tolerability of risk”.

Let me expand upon this point to consider a fourth point, that of NRC’s shift of safety regulations from “prescriptive (or deterministic) regulation” to “performance-based regulation”. There are two fundamental approaches to regulation:  prescriptive regulation that specifies the exact measures a licensee must take, versus performance-based regulation that provides targets to be achieved by safety measures and allows the licensee to propose how to meet the targets. This distinction is important, as there are often several means of achieving safety targets, and different measures may be optimal, depending on the detailed configurations and other characteristics in each plant. In recognition of this, NRC has been shifting the emphasis of its regulations.  Although prescriptive regulation still exists, the NRC is gradually moving in the direction of risk-informed, performance-based regulation in order to make the best use of the efficiency, originality and ingenuity of the regulated utilities in maintaining safety. The move toward risk-informed regulation is a logical extension of an older rule, known as the “backfit rule,” which applies to requirements for modifications in existing power plants. A similar rule was recently introduced in Japan. Under this rule, the NRC requires a modification to an existing facility (i.e., a backfit) “only when it determines…that there is a substantial increase in the overall protection of the public health and safety or the common defense and security to be derived from the backfit and that the direct and indirect costs of implementation for that facility are justified in view of this increased protection.”  These commitments of the NRC to safety regulation, based on scientific analysis and rational logic, may serve as a useful reference to Japan.

NRC, of course, is not perfect.  There are some who are very critical of almost everything the Agency does, and there are many others, including sometimes Commissioners and staff of the NRC itself, who acknowledge NRC shortcomings on particular activities.  Still, the NRC maintains these principles as the standards toward which it strives, and the Agency is widely regarded around the world as the “gold standard” for nuclear regulation.  The NRC is not the only regulatory organization to adopt these kinds of principles; France and the UK, among others, also function as independent and highly transparent regulatory organizations.

Furthermore, while nuclear operators have observed the NRC’s regulations, they have also voluntarily taken a number of actions to upgrade their safety performance, in some cases, beyond NRC requirements, after the accident at the Three Mile Island. It is particularly noteworthy that they have also shared their efforts with other utilities, as well as with other industries that face similar safety issues, and through collaborative activities under the Institute for Nuclear Power Operations (INPO) to which all the nuclear utilities belong, have developed mechanisms and frameworks within the nuclear industry to enhance the effectiveness of their efforts industry wide. As a result, the availability of U.S. nuclear power plants has increased substantially in recent years, improving both economic efficiency and safety concurrently. Reportedly, the Japanese operators have recently started similar voluntary actions by reference to those US efforts and I hope that such measures will function effectively in Japan as well. Of course, it is not as simple as Japan performing regulatory activities following the example of the NRC because there are many differences in the culture and legal systems. However, I certainly believe that the regulatory activities in Japan can be made more successful by adopting the know-how that the NRC has cultivated in its long history of regulatory activities.