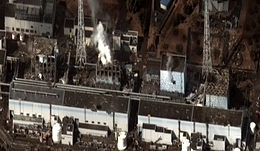 In a couple of days, we will mark the second anniversary of the Fukushima accident.  I know that everyone who blogs on nuclear issues will be thinking about this event as they write.  In the hopes of trying to take a somewhat different approach than other bloggers, I am not going to talk today about things directly related to the accident itself.

Rather, I am going to talk about the general issue of power supply in modern economies, and how the Fukushima accident has illuminated the degree to which the availability of clean energy affects...well, just about everything.

My concern is not just with Fukushima and its direct impacts, but rather with what happens when a country or a region tries to make a sudden shift, as has happened in the shutdown of the operating plants in Japan, as well as in Germany.

The truth is not so simple.  Nations, like individuals, have a powerful self-preservation instinct.  In urgent situations, they will do what it takes, even, sometimes, if it means ignoring any longer-term impacts of what they do, or impacts on others.

In that respect, the path Japan and Germany have chosen is not surprising.  They did not let their population sit in the dark and cold.  They did not let everything grind to a halt.  They fired up old, dirty fossil fuel plants.  So, on the surface, both countries have power.  Admittedly, they don't have as much as they did before, and I'll get to that in a minute, but on the surface, things seem to function.  Yes, the average person has to make some sacrifices and endure some discomfort (and I know from personal experience that summer temperatures can be brutal in much of Japan, especially without adequate air conditioning), but to many, it looks like a slightly lower room temperature and an extra sweater and a stiff upper lip solve the problem.

Not so.  Both countries have significantly increased their greenhouse gas and particulate emissions since they shut down their nuclear plants and fired up their old fossil plants.  Not only is the air noticeably dirtier and less pleasant, the additional emissions have real health and economic consequences.  A very recent report on the health consequences of the nuclear shutdown in Germany put the number of excess deaths per year at around 20,000 (depending on what countries are included.)

The trouble is that these are deaths that are hard for the average person to link to the shutdown of the nuclear plants.  People will make a connection with immediate deaths, a later cancer spike, or perhaps even deaths triggered by the rigors of evacuations.

[Fortunately, in the case of Fukushima, there were no immediate deaths to the general population from the radiation released by the accident, and according to the World Health Organization (WHO), there will be little, if any, increase in the cancer rate in the population around the plant.  (I should note parenthetically that WHO is being criticized by people at both ends of the spectrum.  I won't take that issue on here, but will only say that they are the most credible source I know of that is making projections about the long-term health impacts of the accident.)]

But it is more difficult to make a connection with deaths that are more dispersed, that occur over time, and that generally have a greater impact on those who are elderly or ill.  People tend to expect the elderly and ill to get sick, and don't necessarily understand the role of environmental factors in those illnesses and deaths.

Of course, the obvious counterargument is that the fossil plants are temporary.  The "real" solution is to build more solar and wind power plants.  Both countries are trying to do so.  However, replacing 20-30% or more of a country's electric power supply system is a long-term and expensive proposition.  Looking again to Germany, they estimate a one trillion euro cost to transition to renewable energy.  The coal plants were restarted because it will take many years, at best, and a huge amount of money to replace the lost nuclear power capacity.

Another effect of the closures of the nuclear plants that the public at large doesn't fully see is the effect on the economy.  Here, the effects in Japan are instructive.  They are importing so much more fossil fuels to feed their power plants that Japan now has a record trade deficit.  Furthermore, the lack of sufficient electricity and rising prices for that electricity are forcing manufacturing off shore.  This has already cost Japan more than 400,000 jobs and, if it continues, will further weaken the Japanese economy.  (Germany is somewhat more insulated from these types of economic impacts because they can draw power--some of it nuclear--from neighboring countries.)

Let me close by pointing out that this whole discussion is not an argument for any one source of power.  The same economic consequences would apply if a country suddenly phased out any source of energy that accounted for 20 or 30% or more of its total supplies.  Obviously, one difference is that the environmental consequences of phasing out fossil plants quickly would be positive, but countries have resisted closing fossil plants abruptly for the very same reasons we are now seeing played out in Japan--the economic consequences.

Rather, this discussion is an argument about the folly of a country making an abrupt decision to shut down any large source of energy supply.  While I think a decision to phase out nuclear power is short-sighted on other grounds, that is a somewhat different issue.  If a country decides on a long-term evolution of its energy mix and progress is slow or unexpected issues emerge, there is a chance to modify the plan before significant harm is done.  The "Fukushima problem" I am addressing here is the decision to make any rapid change.  For Japan as a whole, the consequences of the nuclear plant closures, in terms of premature deaths and effects on the economy, may well be the most significant legacy of Fukushima.