Energy from a Global Perspective:

Observations from a Grand Tour

My husband and I just returned from one of those dream trips--an 8-week, around-the-world vacation, with stops in southern Japan, Cambodia, India, Egypt (fortunately, while things were still calm), Italy, France, and England.  (Yes, we are old school, and don't tell any Social Media where we are until we are back home.)

Depending on our audience, we can regale any willing listeners--or anyone we can tie to their seats--with tales of all the interesting ancient ruins we saw, make them salivate as we describe some of our best meals, or bore them to death with hundreds of photographs.

For this audience, I will do none of the above.  Rather, I will focus on some energy-related observations.  Thankfully, we avoided some of the real energy trouble spots that were in the news during our tour.  Most notably, we were not caught in China's suffocating air pollution.  And we were nowhere near any of the disputed oil and gas fields.

Nevertheless, we had our share of experiences that reminded us of just how important energy is, how much of the world still lacks what we take for granted, and how controversial all new energy is.

For example, despite the fact that our hotels were mostly at least somewhat upscale, there were numerous brief power outages in some places.  It was not so much the power outage that got our attention, but rather the fact that no one even paused or looked around.  The flickering of lights and fans was such a common part of the background that locals didn't even notice it.

Then there was the beach resort hotel that acknowledged it was short of power, so although the room had air-conditioning, it was cut off when demand exceeded supply.  Needless to say, in these same places, the Internet was intermittent, and even when we had it, it was marginal.  (To be fair, there were some places in the developed world where the Internet service was also wanting, but in these cases, it was clearly the fault of the hotel, and not of the entire infrastructure.) 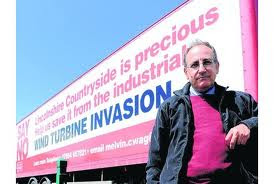 Our final stop tied all our observations together neatly.  We stayed with friends in Lincolnshire, outside of London.  Lincolnshire still has a very rural look in most places, with large farms--and with coal mines.  Despite that, we saw signs all over the countryside saying, "Say NO to Windmills."

This somewhat surprised us, as the land looked spacious enough to support some windfarms without making a significant dent on the bucolic nature of the countryside.  In any event, it was difficult for us to see how the windmills were any worse than the several coal mines where we passed huge piles of coal along the rail line.  And in the United States, in many places, the farmers are profiting from the installation of wind turbines on their land.

We never did figure out what the fundamental objection was.  Are the economics in the UK much different than in the US, so there is no benefit to the farmers?  Has the local population drawn a line, figuring that the coal mines are enough of a contribution to England's energy supply?  Or is it NIMBY, pure and simple?

(To those who will argue that the windmills won't do that much to help meet energy needs, I would only respond that it would be difficult to believe that was the motivation of the locals.  After all, the signs didn't say, "Say No to Windmills, say YES to Nuclear Power Plants"!)

In any event, the trip, in addition to being many other things, was a reminder of at least a couple of the key issues that continue to dominate the energy scene--the lack of sufficient energy supply in many parts of the world, and the lack of acceptance of new facilities to produce more energy.