Post-Fukushima Activities in the US: 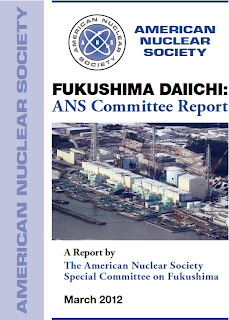 American Nuclear Society and Utility Initiatives
Two related pieces of news crossed my desk yesterday. Both have to do with decisions and actions by US entities in the follow-up to Fukushima.

The first news item was the release of a study of the Fukushima accident by the American Nuclear Society (ANS). (Conflict-of-interest alert--I'm a former President of the ANS.) The study, chaired by former NRC Chairman Dale Klein and University of Wisconsin Professor (and President-Elect of the ANS) Michael Corradini, provides a review of the accident and makes some recommendations. Particularly noteworthy is a conclusion that has been widely circulated in the press that the report concludes that emergency zones around nuclear power plants "should not be based on arbitrary mileage designations," and that the necessary changes "in some cases could expand the standard 10-mile evacuation zone."

This neutral statement is correct, but it skirts the very points that make the press reports compelling. In trying to track down the source of the quotes, I discovered that ANS developed a set of talking points for the media events. The talking points go a bit farther. The quote about the arbitrary mileage designations comes from the talking points, but the specific comment about possible expansion of the 10-mile zone does not. Rather, it seems to have come from an Associated Press interview with one or both of the primary co-authors of the report.

I was especially interested in the conclusion about the 10-mile zone because it has been my observation that many people in the media fail to draw a distinction between the ANS and industry groups such as the Nuclear Energy Institute (NEI). The report itself takes pains to mention the distinction, but critics might point out that most of ANS's positions are aligned with industry interests. I am glad to be able to point to a statement by ANS that provides evidence that the ANS is--as it should be--willing to take positions, when warranted, that could favor more stringent requirements. I only wish they had included this discussion in the report itself.

The second news item was a report that the Union of Concerned Scientists (UCS) is criticizing industry, claiming that industry is trying to skirt new NRC requirements that haven't even been finalized yet. Specifically, UCS is taking aim at the utility industry for implementing improvements to the current fleet of reactors as a response to the Fukushima events prior to the publication of final NRC requirements. This one is puzzling, as I more often find the UCS and other critics of the nuclear industry complaining that the industry is dragging its feet! In this case, the industry is getting out ahead of the curve, and they are still being criticized.

The point of the UCS criticism, as I understand it, is that industry is racing to stay ahead of requirements the Nuclear Regulatory Commission (NRC) might require in the expectation that they will be able to use their political influence to avoid other, possibly more costly, changes.

Rather than criticism, the nuclear utilities deserve credit for being pro-active on the post-Fukushima changes. After all, NRC repeatedly makes the point that the utilities have the first line of responsibility for the safe operation of their plants. These actions are evidence that the utilities are meeting that expectation.

So rather than seeing negatives, I see this week's actions by the ANS and the utilities as demonstrating that major nuclear organizations in the US are shouldering their responsibilities appropriately.