The Origins of the Problem begin to Emerge 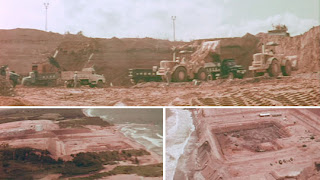 Ground zero: Bulldozers (top) take the top off a 35-meter bluff to prepare the site for the Fukushima No. 1 nuclear plant in the late 1960s in this image taken from the documentary "Reimei" ("Dawn"). Left: The construction site is seen after the leveling work. Right: An excavated area where the emergency diesel generators were installed is seen at the construction site.
Tokyo Electric Power Co. via Japan Times

Until now, our understanding of the Fukushima accident has been focused on information that was immediately available in its aftermath--the size of the earthquake and subsequent tsunami, the location of the emergency diesel generators, the loss of all onsite and offsite power, etc.

Recently, some new information has begun to emerge, information that may further inform what else needs to be examined at other nuclear power plants, especially in Japan, and what safeguards need to be put in place for the future.

One Japan Times article points to the huge irony that Fukushima Dai-ichi was built on a hill that had been cut down in an effort to make the plant more secure against earthquakes! It is a well accepted practice in earthquake areas to anchor building structures in bedrock in order to increase the stability of the building in case of a severe earthquake. Coupled with the facts that have already come out about how the potential magnitude of the maximum possible tsunami was grossly underestimated, it probably seemed like a reasonable engineering tradeoff at the time. And the subsequent cost tradeoffs also seem rational in that light. Although we cannot know for certain today what damage the plant might have suffered from the earthquake had it not been built in the bedrock, clearly, the decision to level the hill exacerbated the effects of the tsunami.

Like many others, I'm still puzzled that there was not earlier recognition of the earlier large tsunami in that region of the country, but I am not a seismologist, and only know by what I've been reading when and how such information was understood.

A second Japan Times article indicates that the decision on where to place the diesel generators was made by GE, and that some TEPCO engineers are now saying that they had concerns about this decision but that it was the long-standing policy at Japanese utilities (pre-dating nuclear power) not to make alterations to imported designs. What is not clear yet is if anyone at TEPCO or the regulatory authority at the time voiced these concerns.

Surely, this is the first of a lot more of the history of the design and construction of the Fukushima plant that will emerge in coming months. I hope that the outcome will not degenerate into finger pointing. The damage has been done. What is needed now is to learn from it so that no similar events ever happen again anywhere in the world.