I continue to play catch-up on the monthly breakout of events important to the history of nuclear power development.  (For those who are not regular readers of this blog, I had planned to publish monthly accounts, but I fell behind over the summer.)  In this blog, I will report on milestones in the history of nuclear power that occurred during the month of September.

September was a particularly important month, as the events that occurred during this month (in different years) included the very first demonstration of electricity production from a reactor, the start-up of the first reactor to operate outside the US, the first civilian research reactor, and more.

Key milestones in September were: 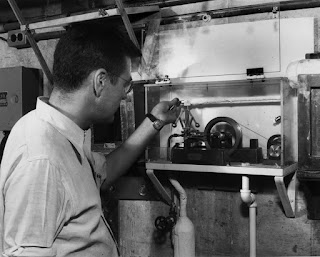 In addition, on Sep. 16, 1944, the first liquid thermal diffusion enrichment (a technology that proved to be a dead end) took place at the S-50 in Oak Ridge, TN, and in Sep. 1965 (specific date unknown), the first confirmed food irradiation took place in Canada.  September was also the month that saw the first accident at a nuclear facility (although not at a reactor) to occur that resulted in significant environmental contamination (Mayak, in the former USSR, on Sep. 29, 1957).

These events and more are described in greater detail in my book, "Nuclear Firsts:  Milestones on the Road to Nuclear Power Development."