I am going to depart a little from my normal themes in this blog and talk about issues that are not themselves directly related to nuclear power.  However, they do relate to some indicators in the areas of research and of technical training that apply to a broad range of disciplines, nuclear among them.

The first warning bell I saw in the last few days was a report on an MIT study that warned that the U.S. is falling behind in a number of key areas of research.  While none of the areas they mention included fission-related research, the very fact that the report identifies a broad range of cutting-edge research areas is troubling.  First, the areas they identify represent some of the key areas of technology today.  Second, it is not hard to guess that the key areas are indicators of a broader trend that affects many more areas of research.

Like the slow loading of straw on a camel that ultimately breaks the camel's back, each small budget cut in science and technology areas probably seems inconsequential to most people.  However, adding them all together--fewer research programs, less research in the remaining areas, cuts in staffing, cuts in training--suggests that the impact will be far greater than even the programs the MIT study names.  Not only will we not realize the benefits of the advances that R&D can bring, we will end up without a next generation of scientists to carry R&D further in the future.

The second warning bell I saw was a study that suggested that environmental sciences programs have a bias against nuclear energy.  At one level, of course, this clearly has a direct effect on nuclear energy.  It reinforces the gulf that many believe already exists between the environmental community and the nuclear community.  It hampers the ability of two groups who should be natural allies from working together.

The investments we make today will inevitably shape the future.  Just as we need robust research in a broad range of areas, we also need to train future scientists, engineers and decision-makers to approach all issues without preconceived biases to assure that the decisions they make are based on sound science.  This applies to decisions about nuclear power, but it also potentially applies to many other issues as well. 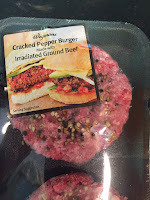 As perhaps a fitting postscript, I include here a photo of a package of irradiated hamburgers.  I covered the issue of food irradiation before, so I won't repeat myself here.  However, irradiated beef strikes me as just the kind of issue that people often approach with preconceived biases.  Perhaps in this case it isn't environmental science students who have this bias (or perhaps it is!--I really don't know), but to me, it is another graphic reminder of how biases sometimes seem to block people from looking at issues objectively, and how those biases sometimes prevent, or make it difficult, for us to enjoy the full benefits of some technologies.