Is Regulation Needed in the First Place?


A recent post of mine on a case of over-regulation that was making magicians develop emergency plans for their rabbits in case of natural disasters inspired a commenter to suggest that we should think twice about writing any new rules.  After all, he says, "we have had zoos for well over 100 years and somehow we survived."  He goes on to say that he doesn't think we need a "constant stream" of new rules.

Although I'm not an expert on zoos, I would guess that there probably have been natural disasters in the past that breached the security of zoo enclosures and allowed the release of dangerous animals, or that resulted in animals dying cruel and unnecessary deaths.  But that is only my guess, and I have no more concrete evidence for that than does my commenter in saying that zoos were fine without any such regulations.

I was addressing only the magicians with rabbits, where the rule was clearly excessive.

But I will also say this:  If you go back in history, most regulations that we have today started out in response to a problem.  Contrary to what some believe, they didn't originate for no reason at all in the halls of Congress, or from the cubicles of government bureaucrats.

I suspect that those early regulations engendered the same kinds of controversies that exist today.  The industries of the day probably thought that things were fine without any regulations at all.  That they could fix their own problems.

And just as surely, the regulations probably missed the mark in some way or another.  Perhaps they didn't address all the problems.  Or perhaps they went too far in some respects.  That gets us back to the case of the rabbit and the magician.

The first solution is to fix problems once they are identified, and hopefully, to fix them more expeditiously than has been the case in the past.

The second solution is to try to get smarter about developing regulations so we don't have as many problems.  This, of course, is easier said than done.  It requires the active involvement of regulators, industry, and other stakeholders.  It requires everyone to look outside the box to think about finding solutions that minimize impediments to operations but at the same time address legitimate health, safety or other concerns.  And it requires them to think about the magicians with rabbits.

It may actually be easier for this kind of interaction to take place in the nuclear area than in the case of caged animals, since magicians and rabbits don't usually participate in the regulatory process, but nuclear vendors, utilities, and public interest groups do.

But the more we try to think outside the box, the more issues there are to be considered, and that takes time, which is also a drawback. 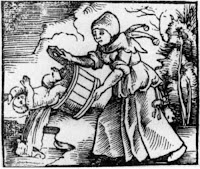 So, yes, regulation is by its very nature an impediment to someone, some of the time.  There are usually good reasons for most of those impediments, but sometimes, there are impediments that are excessive, misdirected, outdated, or unnecessary.  Therefore, the solution to regulatory problems is not to "throw the baby out with the bathwater."  Rather, it is to try be as smart as we can in the first place, and to fix problems promptly as they are identified.