A New Face at the NRC 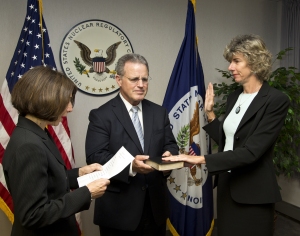 It is hopefully a time for healing within the NRC.  While many of us don't know much about Macfarlane, it is hard to imagine that the situation that has existed will continue.  What has been troubling to me is the number of negative comments I've heard about her even before she was confirmed.

Right now, I think the best course of action for all concerned--the other Commissioners, the NRC staff, licensees, and interested observers, is to give the new Chairman and the new Commission a chance.  Obviously, there will be some break-in period while Macfarlane gets to know her new job and establishes her working relationships with her fellow Commissioners and the NRC staff.

Macfarlane must be aware of the fact that she may not have much time.  She has been appointed to fill the remainder of Jaczko's term, which gives her exactly one year (to July 1, 2013).  If Obama loses the Presidential election this fall, she will certainly not stay on as Chairman (although she could be appointed for another term as a Commissioner).  If Obama wins, she may be reappointed, both as Commissioner and as Chairman, but whether she is reappointed may depend on what she is able to accomplish in the coming year.

In the meantime, those who have had their doubts about Macfarlane should give her the same chance they want her to give to the issues before the Commission--a fair and balanced review.