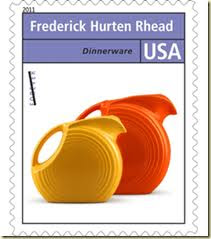 Not Just for Reactors
With this blogpost, I take a little break from the weighty issues of the day. A trip to my local Post Office the other day brought me face to face with the USPS's latest stamp offerings focusing on "pioneers of American industrial design." The set features, as one might guess, designers of things like telephones and typewriters and table lamps and clocks and radios and cameras. But there among them was one that especially resonated with me. A picture of two Fiestaware pitchers, one in a familiar brilliant orange-red glaze. A glaze made possible by the use of uranium.

Yes, uranium. Long, long ago, boys and girls, in the days before nuclear reactors, uranium was a by-product of mining for silver and other minerals. Enterprising people of the day, looking for uses for this material, found it did wondrous things in pottery and glassware. The orange-red glaze used a uranium oxide and was a signature feature of the Fiestaware product line starting in the 1930s. So much so that when the US government commandeered all supplies of uranium as part of its effort to develop the bomb, the company went into decline.

Actually, Fiestaware was not the first product to use uranium. Glass containing uranium oxide has been found in archeological sites dating from Roman times. More recently, so-called uranium glass (also sometimes called Vaseline glass because of its yellow-green color) was popular from the late 1800s to the early 1900s. Uranium glass has an interesting property that makes for a fun parlor trick. When exposed to ultraviolet light, it fluoresces. Of course, that characteristic is a consequence of the electrons, not the nucleus, but it is fun to demonstrate just the same.

I probably first became aware of Fiestaware when I attended the opening session of an ANS meeting over 20 years ago. With all due respect to the many distinguished people who have made presentations at the opening plenaries of ANS meetings over the years, the one I most enjoyed was by James Acord, an artist who gave a highly entertaining presentation about his desire to use Fiestaware in his sculptures, and his long battle with the NRC to obtain a license (yes, really!) to possess the uranium in the large quantities of Fiestaware he was acquiring. I am pleased to report that he was ultimately successful in that endeavor. I am less happy to report that, in the course of looking up some things for this blogpost, I learned that he died this past January.

I'm not an avid antique collector, but after hearing his presentation, I started to keep an eye out for pieces of original Fiestaware in the characteristic color. (Fiestaware is in production again, but doesn't use uranium glaze.) I more recently branched out and acquired a piece of uranium glass. I figure it is only fitting to use a piece or two when I entertain guests.

It's been interesting to watch people's reactions. One woman who has a good technical education surprised me by visibly backing away from a Fiestaware platter on the table. Most people, however, are just curious. Since the colors and the fluorescence are more in the realm of chemistry than nuclear science, even nuclear engineers are perplexed by why the color of the glaze is orange-red and the color of the glass is yellow-green, and why the glass fluoresces but the glaze does not.

Now admittedly, the Post Office series was not meant to honor Fiestaware per se, but rather to honor the man who designed the Fiestaware line (Frederick Hurten Rhead). Nevertheless, I thought the fact that one of 12 stamps on American industrial design features an early use of uranium was significant. So, although the Post Office's stamps would not ordinarily be a subject for one of my blogposts, I felt I could take a late summer break from the more serious stuff and write about Fiestaware and uranium glass.