A Nuclear Pioneer
I was traveling when 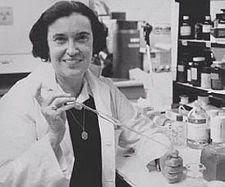 I learned of the death of Rosalyn Yalow, so this is my first opportunity to mention the passing of Rosalyn Yalow on May 30, 2011, and to pay tribute to someone I regard as a true nuclear pioneer. She is a pioneer not only for her professional contributions, but also because she succeeded in an era when women were largely barred from the laboratories and universities.

Perhaps the best account of her remarkable career is her own autobiography, written at the time she received her Nobel Prize in 1977. While her work had nothing to do with nuclear power plants, she made huge contributions to the use of radiation in medicine, so I feel it is appropriate to note her accomplishments in this blog. In particular, she was the co-developer of the radioimmunoassay technique, a technique that uses radioisotope tracing to measure various biological substances in human blood and in other fluids. This technique has been used in numerous medical areas, including among other things, diabetes research and screening of blood donors for hepatitis.

I feel privileged to have met Dr. Yalow in the early 1980s. I was, at the time, working for the Congressional Research Service (CRS). During that time, I covered a number of congressional hearings in areas of science and technology. Dr. Yalow testified at one of the hearings I had covered, and during a break, I was able to talk to her.

She was one of my role models, a Jewish woman and a civil servant--a rare combination in the upper echelons of the scientific community. And in this day and age, when civil servants are often vilified, she presented a stellar example of the kinds of contributions that a civil servant can make to the world.

My interaction with her confirmed something that I have observed a number of times--some of the most prominent people I know of, people who really have far more important things to do than to talk to me, often prove the nicest. With all that was going on in the hearing room, and all the other people clamoring to talk to her, she gave me a few minutes of her undivided attention.

Among other things, I just had to tell her that my mother was a Hunter College graduate, as Dr. Yalow was, and had attended college there at about the same time. I hoped one of the two of them would be able to tell me that their paths had crossed, but alas, neither of them remembered the other (and they were not in the same graduating class).

But their experiences bore some parallels. My mother started her college career interested in science, but decided that she would not be able to get a job in that field and turned to other areas. That was, at the time, the sane and sensible thing to do. Dr. Yalow took another path, one that at the time must have seemed risky at times. There have been many reports of the indignities she suffered early in her career, both as a woman and a Jew, and I won't repeat them here. Suffice it to say that the fact that she managed to overcome them seems nearly miraculous to me. When we won her Nobel Prize, I kind of wish someone had interviewed some of the people who belittled her and who shut her out and asked them what they thought now!

More relevant to me is that her persistence, and her success once some doors opened to her, helped clear the path for all the women who followed her into science and engineering careers. Even though her field was somewhat different, it was Dr. Yalow and women like her who helped make my own career possible, as well as the careers of many other women in the workforce today.

When we think of the women pioneers, we often go back to the very beginnings--to people like Marie Curie and Lise Meitner. We should not forget that obstacles remained for many years after them, obstacles that were slowly and painfully cleared by people like Dr. Yalow and many more whose names may not be household words.

So it is with special reverence that I mourn Rosalyn Yalow's passing, and honor her for her contributions, both to science and to female scientists everywhere.