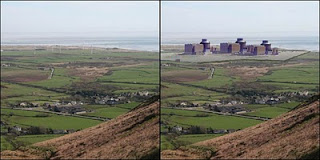 While I did not intend to have two consecutive posts on wind power, two things have happened since my last post that compel me to follow up. In the first place, I had more comments on this post in a shorter time than on most of my other posts, so there is clearly an interest in this topic. Furthermore, one point was raised in these comments to which I wanted to respond. Second, another news article came out since that posting claiming a positive effect of wind on cropland! As a result, I decided that I really do need to follow up on my last post.

All of the comments I received on my last post were of interest, but two raise a question in my mind that I cannot answer at this point. Both noted that the computations of land use for wind and nuclear power in my previous post neglected to include the land required for mining uranium. This point is well taken. A full comparison of technologies needs to account for all the impacts of both.

In trying to look more broadly, I see two points that need to be considered:

First, the windmills of today are not the romantic structures of old Holland. They are advanced, complex structures that use "exotic" materials. In particular, they use neodymium, a rare earth, to make a lightweight generator. Rare earths also need to be mined. At present, I have seen only a few statements about the amount of rare earths needed--it is of the order of one or two tons per wind turbine. The original context in which I saw this estimate focused on the supply issue, as China has about 95% of the world's output of neodymium, according to the accounts I read. I do not have any information on the land use requirements, but surely, if we are incorporating land requirements for mining uranium, we also need to incorporate the land requirements for mining rare earths for wind turbines.

Second, I can envision that different types of land should be treated differently in comparing energy technologies. I'm sure this will prove a controversial statement, as all land has value to someone, but I think a case can be made for comparing the use of similar types of land--say farmland--as long as other impacts, be they to the land, air, or water, are considered somewhere. In that sense, it was not completely wrong to compare the footprints of wind and nuclear power on farmland. What was wrong of me was to leave the reader with the implication that the footprint of the generating facilities was the only footprint these technologies had on land.

Perhaps when I wrote the post I had in the back of my mind the picture that appears at the top of this post, which was someone's mocked up photo of what an area might look like with a nuclear plant vs. wind turbines. This one is particularly egregious, as it shows wind turbines covering only the same acreage that a nuclear plant would occupy, neglecting the fact that those few windmills would produce far, far less power than the nuclear power plant. A different issue, to be sure, but it seemed to me that there might be several layers of misunderstanding in the public's minds--not only does this picture not represent equal levels of power production, the windmills that seem almost to vanish in the distance in the picture really have a bigger footprint than the picture implies. (Something also makes me think that something is wrong with the perspective here, but the other shortcomings of the picture overwhelm the artistic shortcomings.)

In that regard, and in the interest of trying to tell the whole story, a recent report on the work of researchers at Ames Laboratory and the University of Colorado claims some potential benefits of wind power on crops, such as keeping them cooler during the day and warmer during the night due to the air turbulence from the wind turbines. The turbulence could also help dry moisture on the plants, thus reducing the chance of fungal infections, as well as reducing the effects of frost, thus increasing the growing season. Both effects should increase crop production. I note that the article says that the effects haven't been proven yet. If true, they could offset the land use I mentioned in my previous posting. That depends, of course, on whether these early indications are borne out by further research, and what the magnitude of the effect is. This article did not address effects on livestock at all.

The comparisons of energy technologies are complex and multidimensional. I truly doubt that we are going to find a technology that is "best" in every category. In the end, society will have to make choices based on which impacts it is willing to accept to have the benefits of reliable, affordable electricity.