Once Again, Nuclear Power is Used as Model
I could not help but be st 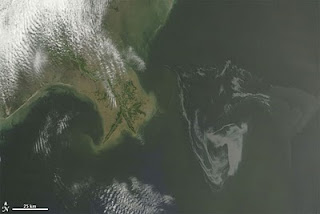 ruck the other day by calls for a "Three Mile Island" type of investigation of the BP oil spill, such as a recent op-ed in the Florida Times-Union. The calls for this action note that the TMI investigation led to the current regulatory regime for nuclear power, and suggest that this type of regulation might be what is needed for the oil industry. The statements refer both to the extent and depth of NRC's regulatory oversight, and to the model of independent regulation that the NRC provides, as contrasted with the reports about the Minerals Management Service (MMS). The emergence and role of the industry's Institute for Nuclear Power Operations (INPO) are also noted.

This is not the first time that analytic methodologies, regulatory approaches, procedures, or other measures that have been developed for nuclear power have been applied to non-nuclear issues and problems. To highlight just a couple with which I am personally familiar:

• Probabilistic Risk/Safety Assessment: I do not profess to be an expert on the history of PRA/PSA. Undoubtedly, people assessed the risks of other technologies before Prof. Norm Rasmussen and his colleagues began their highly systematic studies of the risks, and the probabilities of these risks, for nuclear power operations. What is clear, is that the Rasmussen approach to studying and analyzing risks was more systematic and comprehensive than earlier work in other fields, that it was further developed and refined within the nuclear industry in the years since WASH-1400 was first published, and that it has since become a model for other complex technologies. I know this latter point for a fact. I briefed NASA on PRA while I was at NRC, and I am aware of the use of PRA in the airline industry, at the Department of Veteran's Affairs, and elsewhere, and of growing interest in seeing the use of PRA in other applications, such as telecommunications.

• Emergency Evacuation Procedures: As we all know, there are explicit requirements for emergency evacuation procedures around nuclear power plants. Such procedures, however, do not necessarily exist for other industrial hazards. There have been cases where a toxic chemical spill has occurred on a highway within the Emergency Planning Zone for a nuclear power plant, and the emergency procedures that had been developed for the plant (and never used for that purpose) were actually activated for the toxic spill.

One could point to many other examples as well--in training, procedures-writing, preventive maintenance, and other areas--where the rigor of the approach in the nuclear field has been adopted, at least in part, in other areas.

It is not difficult to see why this is the case. Nuclear power was probably the first major, complex technology to develop under such close public scrutiny and in an era where safety concerns with other technologies were beginning to be recognized.

While every technology since the taming of fire has carried some risk, previously, it was only the benefits of new technologies that were widely recognized and discussed. It is amusing to read old papers that laud the new-fangled automobile, which was expected to reduce the (ahem) pollution on city streets from horses. No one ever projected in those days that the growth of the automobile would lead to other pollution and other problems.

By contrast, from its earliest days, nuclear power was recognized as a resource of great promise and possibility, but also one that carried significant risks if not built and operated to a very high standard. As a result, the standards of performance in the nuclear field have always been higher than those for most other disciplines. Little by little, it has come to be recognized that some of those standards are helpful in other areas as well.

I am in no position to judge the MMS or any of the specific details of the BP oil spill. Nevertheless, it is clear that this accident will spell substantial changes for offshore oil drilling, and perhaps for other aspects of the oil industry as well.

While it is easy for people in the nuclear field to see the BP oil spill as a chance to point out the hazards of other technologies, I do not see this as a time for gloating. The truth is that we need a continued supply of oil, so the problems revealed by the spill need to be stopped up every bit as much as the spill does. The positive message for nuclear power in all of this is the perception in many quarters that the nuclear power industry is the industry that is doing things right.