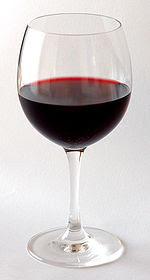 Today’s posting is a little off my usual subject area, but when I find something that combines several of my favorite interests—namely wine and things nuclear—I just can’t resist. A very interesting article from the medical side of the house finds that red wine, in addition to the other health benefits it’s alleged to have, helps limit the toxic effects of radiation therapy for women with breast cancer. Even more interesting was the fact that the effect seemed to max out at one glass of wine a day, a fact that should be reassuring to those who worry about cancer patients indulging in too much self-medication with wine. The effect has not been studied yet for patients, male or female, undergoing radiotherapy for other cancers. Furthermore, I did not find a postulated cause for the effect. While I would ordinarily be inclined to dismiss a finding for which there is no known mechanism, the data seem to show a significant difference in the incidence of radiation-induced toxicity, and there is strong evidence that the moderate consumption of red wine has other health benefits as well. That combination of factors makes a strong case for further research into this intriguing area.