My Summer with the WISE Guys:


Before I launch into today's topic, allow me to report on some personal news.  I recently was notified by the American Society of Mechanical Engineers (ASME) that I have been selected to receive their Engineer-Historian Award for my book on Nuclear Firsts.  Second, I recently provided an English-language version of an Op-Ed of mine that appeared in a Japanese newspaper.  This was recently picked up and published by the Howard Baker Forum on Energy.  All in all, a good week. 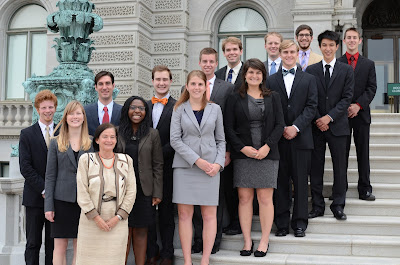 Now, back to the subject of this week's blog.  At the end of May, I announced that I was going to be working with a group of summer interns in Washington.  This program, called the Washington Internships for Students of Engineering, or WISE, is a program that has been operating for over 30 years.  I promised updates on the program during the course of the 9-week program.  I now find that we are 2/3 of the way through the program, and I have yet to provide my first update.  This is my attempt to make up for lost time.

First though, a little more perspective than I previously provided.  Each summer, the WISE program brings a group of engineering students, most of them entering their final year as undergraduates, to DC to study technology policy.  I coordinate visits for them as a group to various government agencies and other organizations in Washington, and they each do a paper on a technology policy topic.  They are supported by 7 engineering professional societies, and the 14 have interests that span most of the engineering disciplines.

Unlike most internships, the WISE interns, or WISE Guys, as they sometimes call themselves, are not assigned to one agency or organization.  This is both a plus and a minus.  When assignments to an office work well, an intern can find him- or herself in the thick of some of the most important issues of the day and make some contribution to it.  When things don't work so well, an intern can find that they are mainly answering phones or copying documents.

The WISE program differs from these others in that it gives the students a broad overview of a lot of different agencies and organizations.  In the past 6 weeks, we have met with officials from the White House Office of Science and Technology Policy, the Department of State, the Department of Energy (two meetings, one with the Office of Nuclear Energy and one with the Office of Energy Efficiency and Renewable Energy), the Environmental Protection Agency, the Nuclear Regulatory Commission, the National Science Foundation, the Defense Advanced Research Projects Agency, the Federal Communications Commission, and the Congressional Research Service.  We also met with the Library of Congress, where the students all registered to be able to do research at the Library, and we had briefings from various private sector experts on standards, Administrative Law, the US budget, the UN's statistics program, public communications, and (upcoming) intellectual property and patent law.  We also held a couple of interesting roundtable discussions, one with some past WISE interns who are now working in the Washington area and the other with a group of current S&T Fellows assigned to Congressional and Executive agency offices.  Whew!

A couple of things stand out from these meetings:

First, most government officials and others, busy as they are, have been very generous with their time.  Not only have they taken the time to meet with us, but many have also invited the interns to contact them later with any specific questions.  Some of the interns have taken them up on that offer.  I know--because I used to work in some of these agencies--that the officials are doing this on top of already intense jobs.

Second, many of the people with whom we've met have shared the stories of how they got where they are, and it's been very revealing to see what unexpected paths many careers have taken.  I know this is true of my own career, but somehow, one always think that everyone else had things figured out and followed some straightforward path.

Third, it has been fun to sit by and watch networking in action.  Sometimes, I have arranged a meeting for a very specific and focused purpose, only to find that the background or activities of one of the people with whom we meet resonates with one of the students in a totally different way than I'd anticipated.

The interns are now heavily into the preparation of written papers on their research projects.  They have done their literature searches and met or spoken with people on various sides of their issues, and on Monday, I should get 14 draft papers for my review.  That should keep me busy for a while.