Eraser Society
I am now going to risk compounding the error of working outside my area of expertise. In a recent blogpost, I talked about the revelation that TEPCO engineers were concerned about a GE decision on the placement of the diesel generators at Fukushima, but that nothing was apparently done about their concern. I attributed this to a social tendency no to want to make waves. I can't tell whether the engineers are to be "blamed" for not raising the issue, or whether the issue was raised, but TEPCO management is to be "blamed" for not challenging GE. Whatever the case, I noted that the behavior fits with the fact that I have learned that children in Japan are taught that "the nail that sticks up gets hammered down."

This started me thinking about whether there are other character traits that may influence safety at nuclear facilities, and I recalled the several instances of coverups that have been revealed over the years at different nuclear facilities. The most well known may be the Monju coverup, but there have been others, including one at Fukushima in 2002. Now, no one from any culture really wants to acknowledge a mistake, and in this case, I don't know what Japanese children are taught, but I do recall several experiences when I lived in Japan that make me wonder if there is a different tolerance for error. I do know that I was always taught that we all make mistakes. The point is to learn from them. Maybe Japanese children are taught that. Maybe not.

What I do recall though, is several instances where I felt a Japanese person made an inordinate effort to "hide" an error, or even an apparent error. In one case, I was talking to an administrative person about arranging a trip. She was making notes in pencil as I laid out my plans. Several times, I started to propose one schedule, then changed my mind. It was my mistake, really. Each time, she industriously erased what she'd written and rewrote the corrected information. Finally, I asked what she was going to do with the paper. She was only going to use it to type out the travel authorization form. I was left wondering why she didn't just cross out the incorrect information.

I never got a satisfactory answer, but sometime later, someone left me a note telling me that the meeting room for an upcoming meeting had been changed. The note was written on yellow lined paper, but something had been whited out with a liquid erase product. You could see that a mistake had been made, but you couldn't see any more what the mistake was. Again, I wondered why not just cross it out? Why use this product, wait for it to dry, and rewrite over that. 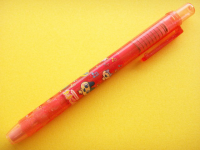 t, I was walking down a Tokyo street and a local gym was handing out a promotional product. Such handouts are a long-standing advertising commercial tradition in Japan, and the handouts include small useful items, such as packets of tissue, pencils, pens, and pads of sticky notes, all carrying the corporate name. In this case, I was handed what looked like a pencil, but when I got it home and looked more closely, it was an eraser encased in a plastic tube that could be pushed up as it was used up. I remember thinking at the time that pens and pencils would be good giveaways in the US, but I doubted that anyone would use an eraser. At that point, I jokingly started saying that the Japanese were an "eraser society."

(As an aside, one Japanese person to whom I'd made that statement retorted that their erasers were much better than ours! He was right. Their erasers never smeared the pencil lead. Which probably only reinforced my point.)

Now, perhaps I am blowing a few small observations out of proportion. Perhaps the admin person who erased her notes or the other person who whited out his mistake on a casual note were just a couple of unusually compulsive people. And as I already noted, no one likes to be caught making a mistake, and a lot of individuals will cover up mistakes if they think they can get away from it. I'm sure anyone can find dozens of instances in the US, in Europe, and everywhere else. But these small cases, and the eraser giveaway, and some of the well-publicized cases in the Japanese nuclear industry that went all the way to the top of their organizations, have made me wonder if there isn't something to my observation.

If there is, the response of the Japanese nuclear establishment should be to follow some of the examples outside Japan, where people are trained in the importance of not hiding problems, and there is a concerted effort to foster an environment where people are not punished for admitting errors. And, just as important, the Japanese nuclear establishment needs to see from the examples that the situation outside Japan is far from perfect in this regard. The importance of not covering up mistakes or errors is one that needs continual reinforcement, and maintaining an environment that allows people to come forward about mistakes without fear of retribution is a constant challenge.