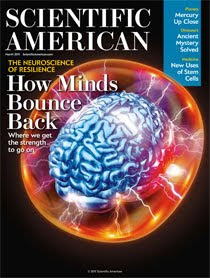 After having reported a couple of months ago that Scientific American readers were not as positive about nuclear energy as I would have expected, I was pleased to see an article in a subsequent issue of Scientific American providing a very positive report on the US nuclear revival.

In particular, the article does not focus on the reactors of the future, which one might expect from a science-oriented publication, but rather reports on the current construction projects in the US, particularly the Southern Nuclear Operating Company project at Plant Vogtle and the South Carolina Electric and Gas Company project at the V.C. Summer Nuclear Station.

The Scientific American report is basically positive, touting the two projects as currently being on time and on budget. In addition, it mentions the Tennessee Valley Authority efforts to complete Watts Bar Unit 2, and the applications for 20 or so other reactors being reviewed by the NRC. It also summarizes a few of the factors aiding this revival--the lessons learned from construction projects abroad, the increased supply of large forgings, and the new fuel fabrication capabilities in the US.

On the other hand, it notes Constellation Energy's withdrawal from the Calvert Cliffs project, and notes that other US nuclear projects have been dropped or delayed, and it includes the usual statement about the lack of a waste disposal facility.

They quote Marvin Fertel, President of the Nuclear Energy Institute, several times in the article. Most notably, he says, "There will be a lot of [new] plants between now and 2050, just not a lot between now and 2020."

This article was written before Fukushima, but a later editorial in Scientific American, published after the March accident, addresses the potential impacts of the Fukushima accident. This article raises the concern that abandoning nuclear power would leave us with alternatives that are more harmful to people and the environment, or that are far from sufficient in availability. It does find fault with both the NRC and the nuclear industry, and some in the industry might take issue with particular statements. Yet, the overriding message I take from the article is that the problems it identifies are manageable, and it proposes that reactor designs and regulatory processes be improved rather than that nuclear power should be ditched.

While all the information in the two articles will be well known to most readers of this blog, I always find it interesting to know what other people are reading, and I was pleased to see this very fair and balanced article in the pages of a publication that is read by a broad spectrum of scientists and engineers.