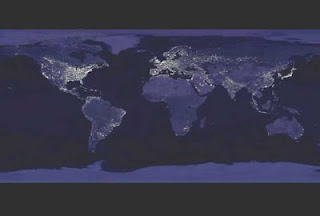 With the negotiations looming on the issue of global greenhouse gas reductions, the nations of the world are beginning to sound more and more like squabbling children. Understandably, each is posturing to obtain the best deal possible. This issue goes way beyond nuclear, of course, but nuclear power can be an element of the solution. However, you wouldn’t know it to hear the statements coming out of some parts of the world.

China and India, with their huge populations, are quickly moving to the top of the polluter list on a national level as their economies continue to grow. According to International Energy Agency (IEA) data, 97% of the increase in CO2 emissions between now and 2030 will come from the developing world. China and India will be a significant part of that.

Yes, they quite rightly point out that their per capita emissions are currently very low. No one can deny that, and no one can deny the rights of the people of the developing world to enjoy the same comforts and benefits that the developing world has enjoyed. But the way countries are debating future restrictions reminds me of the squabbles of my childhood, when my mother told me to clean up my room, and I replied that my brother hadn’t cleaned up his room. “Two wrongs don’t make a right,” she would tell me sternly, and I would clean up my room.

Of course, she would make make my brother clean up his room, too, but not as a precondition for my action.

My mother's message is one that could well apply in the global arena today. The developed world must surely do more—a lot more—to reduce their own emissions. But it will gain us nothing if we reduce CO2 emissions from developed countries only to replace them with CO2 emissions from the developing world.

In this regard, the recent reports of China's position in this matter are encouraging. They now agree that they should make significant cuts in their emissions. Many details remain to be worked out, such as how much, how firm a commitment they will make, and what assistance they want from developed countries in order to achieve this objective. Still, it is good to see this step forward, and it would be encouraging to see India follow suit.

The world is where it is today in large part because we didn’t know better at the outset. When total emissions were small, they were easily handled by the atmosphere. As they grew, and as our understanding of the world grew, we very slowly became aware of what was happening. Now that we do understand, the developed world must do more.

The next round of international climate negotiations should put measures in place to strongly and equally discourage all countries, developed and developing, from adding new fossil-fired plants to the electricity grid.

Instead, at least for new generation, the nations of the world should all turn to low-emitting electricity-producing technologies, although the specific choices of low-emitting technologies will vary with the particular circumstances of each country.

Looking first at the addition of new energy sources, the developed nations of the world have the most options, and should exploit all of them. Nuclear power already plays an important role in a number of developed countries, and can and should play an increasing role in meeting future baseload needs. Some countries are also increasing their solar and wind generation capacities. At present, they generally pay a premium to do so. Even so, solar and wind cannot realistically meet all new energy needs. For a variety of reasons, it is desirable for developed countries to add a mix of low-emitting technologies.

China and India, too, will benefit from using a mix of nuclear and renewable technologies. Both China and India already have strong nuclear programs and should build on those. In general, nuclear technology is cost competitive with other options, so there would seem to be little justification for adding fossil fuel burning sources instead of adding nuclear generation. Both these countries also have substantial possibilities to implement solar and wind technologies. While these technologies are more expensive in many applications, costs are coming down and they may be competitive in some applications.

The situation for other developing countries will vary considerably, depending on the national grids, population distributions, and other factors. A number of developing countries are considering nuclear power. While the nuclear power option is not viable for all countries, and the hurdles (including investment) to starting a nuclear power program are significant, it is an attractive option in some cases. Countries that do not have the resources or infrastructure to start a nuclear power program admittedly have fewer options. However, many of these countries also have limited grids and sparse or remote populations, and local energy generating technologies may fit their current needs.

The next international climate-control agreement reached should build in mechanisms, as the Kyoto Protocol did, that give the developed countries some incentive to provide assistance to developing countries. However, the new mechanisms should include all technologies that achieve reduced emissions. With appropriate mechanisms, there should be no excuse for developing countries to add yet more fossil-fired plants to the world.

Another interesting situation arises in the case of countries with small populations, but large per capita emissions, such as Australia. Australia has actually overtaken the United States in per capita emissions, at least according to some reports. Although their contribution to emissions as a country is small, using that as a justification seems inappropriate for a developed country. In particular, it seems odd to me that a country with such huge resources of uranium is not looking to nuclear technology to curb its own emissions. Australia is beginning to think along these lines now, and I would encourage that thinking. Needless to say, Australia, with its small population and large landmass, and located where it is geographically, also has substantial possibilities to employ renewable technologies.

The negotiations ahead are likely to be difficult, as every country understandably wants the best possible deal. However, every country needs to look deeply into its own situation and acknowledge what it can do. My mother’s other favorite admonition to me, when I wanted to do something that would be detrimental to me just to one-up my siblings, was that I was cutting off my nose to spite my face. Every country needs to realize that what brings them some advantage in the near term could harm us all in the end.
Posted by Gail Marcus at 1:16 PM